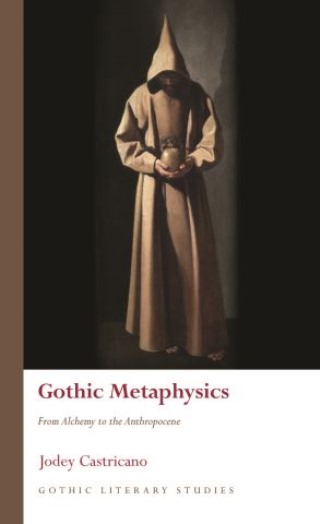 From Alchemy to the Anthropocene

Gothic Metaphysics is a radical departure from Freudian-centred criticism of Gothic literature. It aims to explore our modern dilemma in the time of the Anthropocene, by bringing to light the role of Gothic since its inception in 1764 in holding space for a worldview familiar to certain mystical traditions – such as alchemy, which held to the view of a living cosmos yet later deemed ‘uncanny’ and anachronistic by Freud. In developing this idea, Gothic Metaphysics explores the influence of the Middle Ages on the emergence of Gothic, seeing it as an encrypted genre that serves as the site of a ‘live burial’ of ‘animism’, which has emerged in the notion of ‘quantum entanglement’ best described by Carl G. Jung and physicist Wolfgang Pauli in the theory of synchronicity linking alchemy with quantum mechanics. This relationship finds itself in dialogue with the Gothic’s long-held concern for the ‘sentience of space and place’, as described by renowned Gothic scholar Fredrick Frank. The volume Gothic Metaphysics is multi-valent and explores how Gothic has sustained the view of a sentient world despite the disqualification of nature – not only in respect to the extirpation of animism as a worldview, but also with regard to an affirmation of consciousness beyond that of human exceptionalism.