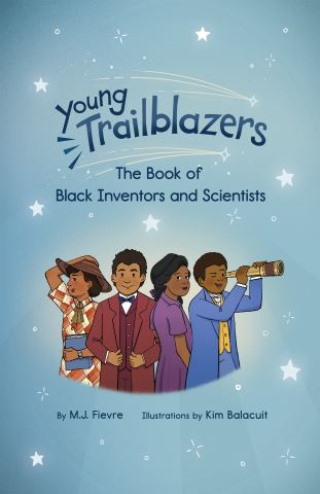 Young Trailblazers: The Book of Black Inventors and Scientists

Learn About Amazing Black Trailblazers Who Changed the World

A fun new book for children that teaches them about Black trailblazers who have impacted the world through their actions and inventions.

From Black Inventors to Black Scientists. Take your child on an adventure and travel through time to meet historical black trailblazers who changed the game. Countdown to liftoff with Katherine Johnson who helped pioneer U.S. crewed space missions. Safely cross the street with Garrett Morgan who invented the traffic signal or even sing your heart out with James West’s invention of the microphone.

Experience an array of rich Black history. There are Black scientists and Black inventors such as George Washington Carver and Madam C.J. Walker we all know. There are also dozens of Black trailblazers that we don’t, all of whom have accomplished remarkable things in literature, entertainment, education, STEM, business, military and government services, politics and law, activism, sports, spirituality, and more.

Cuddle up with your child and meet the Young Trailblazers who will:

If your child enjoyed books about Black History such as Black Heroes, 100 African-Americans Who Shaped American History, or Black Women in Science, they’ll love Young Trailblazers: The Book of Black Inventors and Scientists.

Born in Port-au-Prince, M.J. Fievre, B.S. Ed, earned a bachelor’s degree in education from Barry University. A seasoned K–12 teacher, a creator of safe spaces, and an initiator of difficult conversations, she spent much time building up her students, helping them feel comfortable in their own skin, and affirming their identities. Her close relationships with parents and students led her to look more closely at how we can balance protecting a child’s innocence with preparing them for the realities of life. She has taught creative writing workshops to children and teens at the O Miami Poetry Festival and the Miami Art Museum, as well as in various schools in Santa Cruz de la Sierra (Bolivia), Port-au-Prince (Haiti), and South Florida. She’s also been a keynote speaker at Tufts University (Massachusetts), Howard University (Washington, DC), the University of Miami (Florida), and Michael College (Vermont) and has served as a panelist at the Association of Writers & Writing Programs Conference (AWP).

M.J.’s publishing career began as a teenager in her native Haiti. At nineteen years old, she signed her first book contract with Hachette-Deschamps for the publication of a YA book titled La Statuette Maléfique. Since then, M.J. has released nine YA books in French that are widely read in Europe and the French Antilles, and she is the author of the award-winning Badass Black Girl book series for tweens and teens (in English). One Moore Book published M.J.’s first children’s book, I Am Riding, as part of a special limited series edited by Edwidge Danticat. A middle-grade book, Young Trailblazers, and picture book, Sam Is Afraid of Christmas, are both set to be released by DragonFruit in the fall of 2021.

As the ReadCaribbean program coordinator for the prestigious Miami Book Fair, M.J. directs and produces the children’s cultural show Taptap Krik? Krak! For her podcast, MJ has interviewed many literary legends, including Edwidge Danticat, Alice Randall, and Nikki Giovanni.