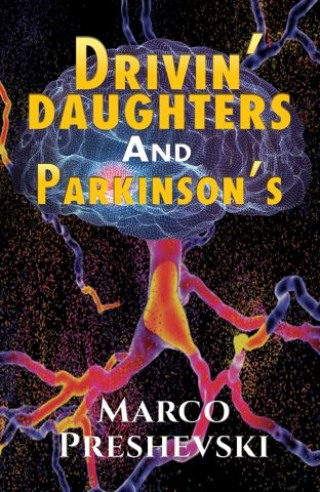 “I have Parkinson’s Disease…”
The words kept hitting me like a hammer on my forehead.
Parkinson’s Disease… PARKINSON’S DISEASE… PARKINSON’S DISEASE.
When Marco Preshevski was diagnosed with Parkinson’s Disease, his life fell to pieces. He had just turned 30 years old.
Drivin’ Daughters and Parkinson’s is the remarkable story of Marco’s rollercoaster journey through life before, during and after his diagnosis of Parkinson’s Disease. Beginning on that fateful day in March 2001, Marco tells the fascinating story of how Parkinson’s Disease slipped into his life, how it made its presence known and the unending battle he has fought balancing symptom relief with side effect control, using various medications and cutting-edge surgery.
Marco explains in detail the destructive psychological consequences he experienced at the hands of Parkinson’s and the devastating effect this had on his personal relationships. Often going into deep, intimate detail, Marco tells us how Parkinson’s Disease drove him to the edge of his life, until he discovered the reason for his existence on earth.
Told through the eyes of an ‘ordinary’ man, Drivin’ Daughters and Parkinson’s is a fresh look at personal experience of this difficult-to-handle medical condition. Hilarious, wholly inspirational and at times difficult to believe, this book should be read by anyone whose life has been touched by Parkinson’s, by those who want to understand the disease better and by those who want to appreciate the patient’s point of view.

Marco Preshevski: Marco Preshevski was born in 1971 in Luton, United Kingdom. After spending his childhood and adolescent years in the west of England, he attended the University of Bristol from which he graduated in 1993 with a Bachelor of Science degree (with honours) in Chemistry. Marco worked for almost twenty years in healthcare marketing communications including ten years’ experience in advertising and brand development, before moving out to Australia. Marco lives in Sydney, New South Wales, Australia, where he spends as much time as possible raising his daughter.