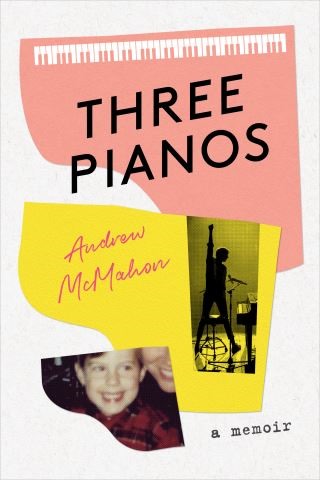 From beloved indie musician Andrew McMahon comes a searingly honest and beautifully written memoir about the challenges and triumphs of his life and career, as seen through the lens of his personal connection to three pianos.

Andrew McMahon grew up in sunny Southern California as a child prodigy, learning to play piano and write songs at a very early age, stunning schoolmates and teachers alike with his gift for performing and his unique ability to emotionally connect with audiences. McMahon would go on to become the lead singer and songwriter for Something Corporate and Jack's Mannequin, and to release his debut solo album, Andrew McMahon in the Wilderness, in 2014.

But behind this seemingly optimistic and quintessentially American story of big dreams come true lies a backdrop of overwhelming challenges that McMahon has faced—from a childhood defined by his father's struggle with addiction to his very public battle with leukemia in 2005 at the age of twenty-three, as chronicled in the intensely personal documentary Dear Jack.

Overcoming those odds, McMahon has found solace and hope in the things that matter most, including family, the healing power of music and the one instrument he's always turned to: his piano. Three Pianos takes readers on a beautifully rendered and bitter-sweet American journey, one filled with inspiration, heartbreak, and an unwavering commitment to shedding our past in order to create a better future.

Andrew McMahon: Andrew McMahon is an American singer-songwriter. He was the vocalist, pianist, and primary lyricist for the bands Something Corporate and main songwriter for Jack's Mannequin and performs solo both under his own name as well as his moniker, Andrew McMahon in the Wilderness. He is also the founder of the Dear Jack Foundation. McMahon lives in Southern California with his wife and daughter.