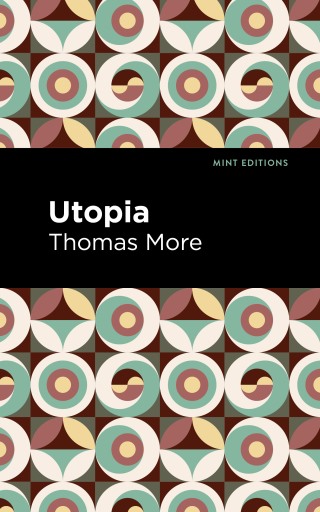 Utopia (1516) is a work of political satire by Thomas More. Published in Latin while More was serving as Privy Counsellor under King Henry VIII, the text is stylized as a true account of a new civilization discovered in the New World by traveler Raphael Hythlodaeus. While there have been varying interpretations of Utopia over the centuries, it is most consistently regarded as a work of political philosophy in the tradition of Plato’s Republic that satirizes European society by contrast with the laws and traditions of the Utopian people. “The island of Utopia is in the middle two hundred miles broad, and holds almost at the same breadth over a great part of it, but it grows narrower towards both ends. Its figure is not unlike a crescent.” For centuries, Utopia has been seen as an essential work of Renaissance humanism for its vision of a just and highly organized political system characterized by the abolition of private property, communal values, full employment, and free accessible healthcare. While scholars have long debated whether More envisioned his Utopia as a positive representation of society or as merely an unattainable vision of life on earth, his work remains an essential contribution to political discourse that continues to inform readers today. With a beautifully designed cover and professionally typeset manuscript, this edition of Thomas More’s Utopia is a classic work of English literature reimagined for modern readers.

Thomas More (1478-1535) was an English lawyer, judge, philosopher, statesman, and humanist. Born in London, he was the second of six children born to Sir John More and his wife Agnes. From 1490 to 1492, he served as household page for Archbishop of Canterbury John Morton, who introduced him to Renaissance humanism and nominated him for a spot at the University of Oxford. After two years of learning Latin and Greek, he left to study law and was called to the Bar in 1502. Two years later, he was elected to Parliament, launching his political career in earnest. In 1516, while serving as Privy Counsellor, More published Utopia, a work of political philosophy and social satire that describes the customs of a fictional island nation. After a series of prominent posts in the court of King Henry VIII, More succeeded Thomas Wolsey as Lord Chancellor in 1529, making him one of the most powerful men in England. His three-year reign was mired in controversy, as he worked to impede the influence of the Protestant Reformation through the persecution of heretics and the suppression of Lutheran books, especially the Tyndale Bible. In 1530, he refused to sign a letter to Pope Clement VII that sought to annul Henry’s marriage to Catherine of Aragon, damaging his relationship with the King and distancing himself from clergymen loyal to the crown. After resigning in 1532, he further enraged the King by refusing to attend the coronation of Anne Boleyn, leading to a series of charges orchestrated by Thomas Cromwell. His refusal to take the Oath of Supremacy, which recognized the King as the figurehead of a new Church of England, would culminate in his being found guilty of high treason in 1535. Five days after his trial by jury, More was beheaded at Tower Hill. Recognized as a martyr by the Catholic Church, he was canonized as a saint in 1935 by Pope Pius XI.