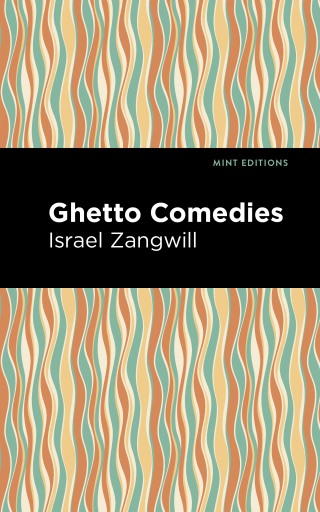 Ghetto Comedies (1907) is a collection of stories by Israel Zangwill. Raised in London by parents from Latvia and Poland, Zangwill understood the plight of the city’s Jewish community firsthand. Having risen through poverty to become an educator and author, he dedicated his career to the voiceless, the oppressed, and the needy, advocating for their rights and bearing witness to their suffering in some of the most powerful novels and stories of the Victorian era. “People who have been living in a Ghetto for a couple of centuries, are not able to step outside merely because the gates are thrown down, nor to efface the brands on their souls by putting off the yellow badges. The isolation imposed from without will have come to seem the law of their being.” As a Jewish immigrant who grew up in poverty in London, Israel Zangwill knows that the condition of life in the ghetto changes not just lives, but mentalities. In the fifth and final installment of his Ghetto series, Zangwill imagines the lives of everyday Jewish people. A German painter searches for a Jewish model for his painting of Jesus Christ; Solomon Cohen, or S. Cohn, rises to prominence as a Town Councillor in Sudminster while suppressing his Jewish heritage; Bloomah Beckenstein, a young Jewish girl, is blamed for spreading smallpox at her school in London. These are the lives that take shape in the author’s skillful hands, people whose experiences with love, loss, doubt, and faith are not so different from our own. The tales of Jewish life in Ghetto Comedies earned Zangwill comparisons to Dickens upon publication and helped to establish him as an author with a gift for intensive character study and a passion for political themes. With a beautifully designed cover and professionally typeset manuscript, this edition of Israel Zangwill’s Ghetto Comedies is a classic of British literature reimagined for modern readers.

Israel Zangwill (1864-1926) was a British writer. Born in London, Zangwill was raised in a family of Jewish immigrants from the Russian Empire. Alongside his brother Louis, a novelist, Zangwill was educated at the Jews’ Free School in Spitalfields, where he studied secular and religious subjects. He excelled early on and was made a teacher in his teens before studying for his BA at the University of London. After graduating in 1884, Zangwill began publishing under various pseudonyms, finding editing work with Ariel and The London Puck to support himself. His first novel, Children of the Ghetto: A Study of Peculiar People (1892), was published to popular and critical acclaim, earning praise from prominent Victorian novelist George Gissing. His play The Melting Pot (1908) was a resounding success in the United States and was regarded by Theodore Roosevelt as “among the very strong and real influences upon [his] thought and [his] life.” He spent his life in dedication to various political and social causes. An early Zionist and follower of Theodor Herzl, he later withdrew his support in favor of territorialism after he discovered that “Palestine proper has already its inhabitants.” Despite distancing himself from the Zionist community, he continued to advocate on behalf of the Jewish people and to promote the ideals of feminism alongside his wife Edith Ayrton, a prominent author and activist.