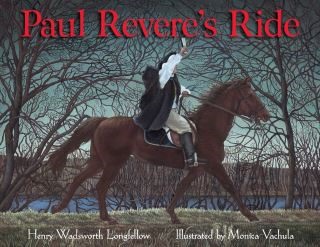 The classic poem in a newly illustrated edition. Paul Revere and his famous ride were immortalized by Henry Wadsworth Longfellow in a poem published in 1861, more than eighty years after the even. Longfellow wrote the poem at the time of the Civil War. He hoped that his story of an ordinary citizen who comes to the aid of his country would stir patriotic feelings and support for the Union. He was right. In face, if it hadn't been for Longfellow, Paul Revere may have remained a local legend. The poem fired the imaginations of Americans and a national hero was born. This illustrated edition of the classic poem features vivid oil paintings by Monica Vachula, whose research into period and place can be seen in the smallest detail. A concluding note by historian Jayne Triber, author of A True Republican: The Life of Paul Revere, explores the poem and Paul Revere's place in American history.

Monica Vachula provided the illustrations for Tea with an Old Dragon: A Story of Sophia Smith, Founder of Smith College by Jane Yolen. She lives in Harvard and in Hatfield, Massachusetts.

Jayne E. Triber, Ph.D., the author of A True Republican: The Life of Paul Revere.