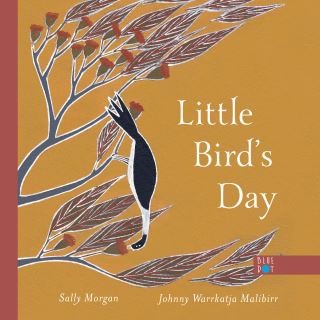 A joyful, universal story of a day in the life of Little Bird.

A heartening read-aloud about a day in the life of Little Bird, who sings the world alive, flies with Cloud, travels with Wind, nestles with Moon, and dreams of flying among the stars.

Sally Morgan: Sally Morgan is one of Australia’s best-known Aboriginal artists and writers. She belongs to the Palyku people from the eastern Pilbara region of Western Australia. Her widely acclaimed autobiography, My Place, is one of Australia’s most celebrated works. Morgan is the director at the Centre for Indigenous History and the Arts at the University of Western Australia. Johnny Warrkatja Malibirr is a Yolŋu man from the Aborigional Ganalbingu clan and is known for his paintings of Ganalbingu song lines as well as his mother’s Wägilak clan stories. In 2017 he was the inaugural winner of the Kestin Indigenous Illustrator Award.