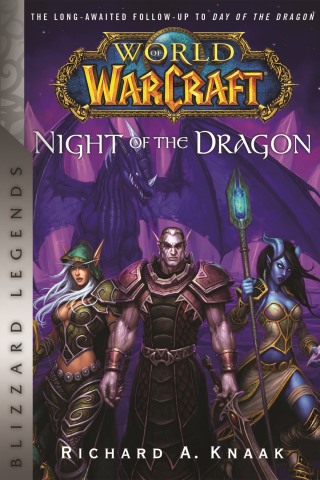 World of Warcraft: Night of the Dragon

Grim Batol: its dark legacy stretches back into the mists of Azeroth's past. But most know it as the site of a terrible tragedy -- where the vile orcs corrupted the hatchlings of the noble Dragonqueen, Alexstrasza, and used them as weapons of war. Though a band of heroes, led by the enigmatic mage, Krasus, defeated the orcs and freed the captive dragons, the cursed mountain stands as another ravaged landmark within the...WORLD OF WARCRAFT...But now Krasus -- known to some as the red dragon Korialstrasz -- senses the malice of Grim Batol rising once more to threaten those he holds dear. Determined this time to confront this evil by himself, he is unaware of the quests that will draw others to Grim Batol and reveal the monstrous truth that could not only herald their deaths, but usher in a terrible new age of darkness and destruction.

Richard A. Knaak: Richard A. Knaak is the New York Times and USA Today bestselling author of The Legend of Huma, WoW: Wolfheart, and nearly fifty other novels and numerous short stories, including works in such series as Warcraft, Diablo, Dragonlance, Age of Conan, the Iron Kingdoms, and his own popular Dragonrealm. He has scripted comics and manga, such as the top-selling Sunwell trilogy, and has also written background material for games. His works have been published worldwide in many languages. His most recent releases include Black City Demon --- the second in his new urban fantasy series from Pyr Books, Reaper's Eye for the Pathfinder series, and a new edition of his novel King of the Grey. He is presently at work on several other projects, among them continuing Knights of the Frost for the Dragonrealm, Black City Dragon --- the sequel to Black City Demon --- and more. The entire Turning War trilogy (Dragonrealm) --- Dragon Masters, The Gryphon Mage, and The Horned Blade --- will be released from Permuted Press in the summer of 2017 starting in July. Currently splitting his time between Chicago and Arkansas, he can be reached through his website: http://www.richardallenknaak.com where more information on this trilogy can be found. While he is unable to respond to every e-mail, he does read them. Join his mailing list for e-announcements of upcoming releases and appearances. Please also join him on Facebook at @richardallenknaak and Twitter.