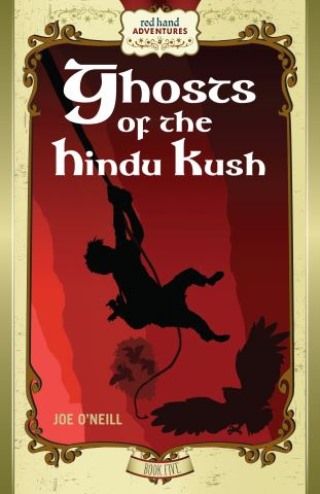 Ghosts of the Hindu Kush

A mad mystic, an infamous German pilot, deadly assassins, and a world at war. In the book Kirkus Reviews has called a "thrilling, well-woven adventure," the kid guardians of the Red Hand legend journey to the most dangerous place on earth and face their most epic adventure yet.

After crossing the treacherous waters of the Black Sea, young adventurers Tariq, Aseem, and Fez dock their small sailboat in the Russian port city of Rostov-on-Don. Armed only with a charmed map, a legendary journal, and the lessons learned from countless skirmishes around the globe, they search the city for the solution to a mysterious clue—the word “Marius” scribbled on a scrap of paper. Little do they know the word will send them into the custody of an enigmatic explorer…and on a journey into the most dangerous place on earth.

Meanwhile, Margaret and Inez find themselves caught in a European countryside ablaze with the first World War. As Inez battles the horrors of the front line medical tents, Margaret dogfights an infamous German airman and emerges as the Allied Powers’ most talented pilot. A political mission aims to reunite them with old friends in the Rif Mountains of Morocco, but all paths may ultimately lead to a mad Russian monk with supernatural powers.

Facing their most difficult and exciting challenge yet, the group will need to rely on courage and determination as they cross a war-torn world, face deadly assassins, struggle to survive harsh landscapes, and work to fulfill the Red Hand prophecy.

The fifth installment of the award-winning Red Hand Series for middle-readers, Ghosts of the Hindu Kush takes you on an action-packed journey through cultures, locations, and true historical events via a diverse set of characters. Author Joe O’Neill, dubbed the “Ian Fleming of the middle reader set” by Kirkus Reviews, has crafted a fantastic, exotic, and electric tale that shows young readers—and adults with a taste for classical action—that no matter how humble your beginnings, bravery and cooperation can overcome any challenge.

Joe O'Neill: Joe O'Neill is the CEO and founder of Waquis Global Services, which gives him the opportunity to travel the world and explore different cultures. He was inspired to write the Red Hand Adventures while on safari in Sri Lanka. As he was driving along in an old jeep, under the full moon casting silhouettes of wild elephants against the jungle wall, the image of a rebel orphan in old Morocco popped into his head. While he wishes he could take credit for the idea, it was a story that was already out there, waiting to be told.