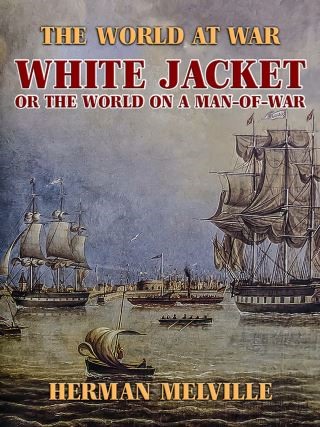 White Jacket, or The World on a Man-of-War

White-Jacket; or, The World in a Man-of-War is the fifth book by American writer Herman Melville, first published in London in 1850. The book is based on the author's fourteen months' service in the United States Navy, aboard the frigate USS Neversink (actually USS United States). The novel takes its title from the outer garment that the eponymous main character fashions for himself on board ship, with materials at hand, being in need of a coat sufficient for the rounding of Cape Horn. Due to a ship-wide rationing of tar, however, White-Jacket is forever denied his wish to tar the exterior of his coat and thus waterproof it. This causes him to have two near-death experiences, once when he is reclining among the canvases in the main-top and, his jacket blending in with the surrounding material, he is nearly unfurled along with the main sail; and once when, having been pitched overboard while reeving the halyards, he has to cut himself free from the coat in order not to drown.

Herman Melville: Herman Melville (born Melvill; (August 1, 1819 – September 28, 1891) was an American novelist, short story writer, and poet of the American Renaissance period. Among his best-known works are Moby-Dick (1851); Typee (1846), a romanticized account of his experiences in Polynesia; and Billy Budd, Sailor, a posthumously published novella. Although his reputation was not high at the time of his death, the centennial of his birth in 1919 was the starting point of a Melville revival, and Moby-Dick grew to be considered one of the great American novels.