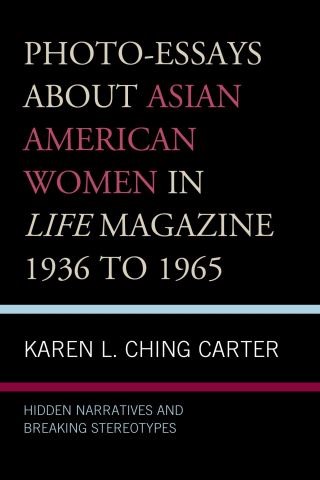 The editors of Life Magazine, a mass-produced picture magazine, composed picture narratives that entertained, informed, and influenced mid-twentieth-century American society. Photo-Essays about Asian American Women in Life Magazine 1936 to 1965: Hidden Narratives and Breaking Stereotypes is a rhetorical analysis of how Life Magazine’s photo-essays represented and shaped white American middle-class attitudes toward Asian American women. In the time period studied, 1936 to1965, most white Americans were exposed to Asian woman primarily through film or in illustrated drawings. Hollywood in particular created caricatures depicting Asian women as evil dragon ladies or sex slaves, both of which implied prostitution, which affected their legal and social standing in early and mid-twentieth-century America. The book illustrates the ways in which the Life editors utilized the photo-essay as a narrative art form to counter stereotypical and racist Hollywood depictions of Asian women as prostitutes and to envision them as part of the American middle class, thereby promoting a sense of national identity that included Asians as Americans. This book will be of interest to scholars in the fields of women’s studies, cultural studies, visual culture, Asian American studies, and history.

Karen L. Ching Carter is senior lecturer in English at the University of Vaasa, FI.