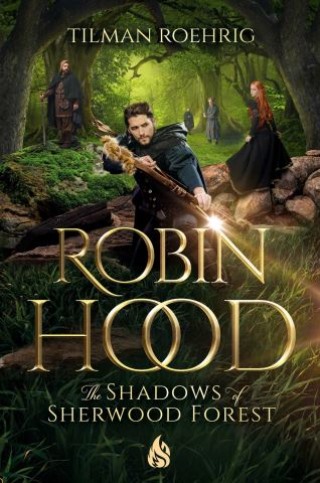 When peasant John Little witnesses the Sheriff of Nottingham’s men destroying his village for John’s crime of poaching deer to feed his people, he flees into the tangle of Sherwood Forest with the only other survivor, his young foster daughter Marian. But dangers lurk there, too: the outlaw Robin Hood soon catches them and takes them prisoner.

Robin Hood does not quite match the heroic stories that are already told about him. For all Robin’s dazzling bravado and clever tricks, the reality of his fight against oppression by the Norman nobility is a rough and dirty life in the forest, outlawed and constantly hunted.

As the newly dubbed Little John gets an education in how to fit into Robin’s dangerous band, Marian, too, grows into a force to be reckoned with. Thrust into life in a world of fearless bandits, uncertain allies, and merciless vendettas, Little John and maid Marian earn their place—and build an unshakable friendship with Robin Hood.

Told with earthy historical detail and unforgettable characters, this is a must for any young reader fascinated by knights and fights, kings and peasants, or who wants to delve into the many tales that built the Robin Hood legend

Roehrig Tilman: Tilman Roehrig has been a writer for over four decades. His novels have been translated into over nine languages. He has received numerous awards for his work, including the Great Culture Prize of the Rhine region. His previous YA historical novel, Erik the Red, was published in English by Arctis in Spring 2021. He lives near Cologne, Germany.