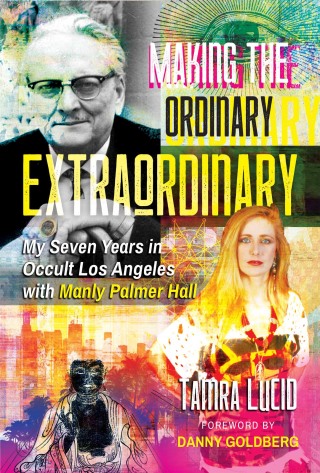 • Explains how Hall adopted the author as his “girl Friday” and personal weirdo screener, giving her access to the inner circles of occult Los Angeles

• Richly depicts the characters who worked and gathered at Hall’s Philosophical Research Society, including Hall’s wife, the famed “Mad Marie”

In the early 1980s, underground musicians Tamra Lucid and her boyfriend Ronnie Pontiac discovered the book The Secret Teachings of All Ages at the Bodhi Tree bookstore in Los Angeles. Poring over the tome, they were awakened to the esoteric and occult teachings of the world. Tamra and Ronnie were delighted to discover that the book’s author, Manly Palmer Hall (1901-1990), master teacher of Hermetic mysteries and collector of all things mystical, lived in LA and gave lectures every Sunday at his mystery school, the Philosophical Research Society (PRS). After their first tantalizing Sunday lecture, Tamra and Ronnie soon started volunteering at the PRS, beginning a seven-year friendship with Manly P. Hall, who eventually officiated their wedding in his backyard.

In this touching, hilarious, and ultimately tragic autobiographical account, Tamra shares an intimate portrait of Hall and the occult world of New Age Los Angeles, including encounters with astrologers, scholars, artists, spiritual seekers, and celebrities such as Jean Houston and Marianne Williamson. Tamra vividly describes how she used her time at the PRS to learn everything she could not only about metaphysics but also about the people who practice it. But when Tamra begs Hall to banish a certain man from the PRS--the same man who inherited Hall’s estate and whom his wife Marie later alleged was Hall’s murderer--Tamra and Ronnie are the ones banished.

Tamra’s noir chronicle of an improbable friendship between a twenty-something punk and an eighty-year-old metaphysical scholar reveals Hall not only as an inspiring esoteric thinker but also as a genuinely kind human being who simply wanted to share his quest for inner meaning and rare wisdom with the world.

Tamra Lucid: Tamra Lucid is a founding member of the experimental rock band Lucid Nation. She was a writer and editor for Newtopia Magazine and the principal interviewer for the original Reality Sandwich. She has produced documentary films, including Exile Nation: The Plastic People, End of the Line: The Women of Standing Rock, and the award-winning Viva Cuba Libre: Rap Is War. She lives in Los Angeles with her husband, Ronnie Pontiac.