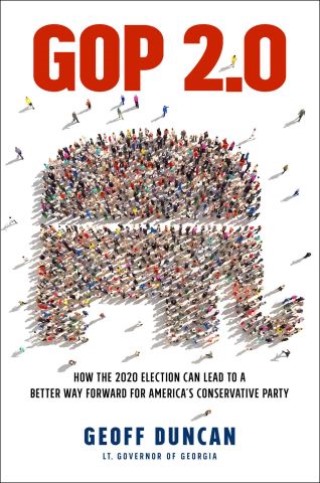 GOP 2.0 is both a book and a movement that unites people around a common view of civility and freedom. GOP 2.0 puts policy over politics. It aspires to make Americans great. It’s about Geoff Duncan’s “P.E.T. Project,” reviving the party with conservative Policies, genuine Empathy, and a respectful Tone.

“I’m not the only conservative in America who wakes up wishing the past months were just a bad dream. I’m not the lone Republican who feels in my gut that our party is following the wrong path. And I’m not alone in believing there’s a better way forward.”

As Lt. Governor of the State of Georgia, Geoff Duncan never expected to find himself in the national spotlight – or in the crosshairs of the President of the United States. Then the 2020 Election and its aftermath brought the nation’s attention to Georgia. Amidst a hurricane of conspiracy and misinformation, Duncan spoke up for truth, conservative values, and the Republican Party he knows.

Duncan had a front row seat as Georgia endured a long nightmare of fraud allegations, Presidential coercion, a dual runoff that flipped the U.S. Senate, and election reform that sparked national protests. He called for reason and principle even as Donald Trump viciously attacked him. He fought for “the silenced majority,” current or former Republicans who yearn for a party that can reclaim lost ground and leave behind the politics of dishonesty, disorder, and division.

GOP 2.0 is Geoff Duncan’s vision, forged by his unexpected struggle for the party’s future. In his words, “GOP 2.0 is not a new party – it’s a better direction for our Republican Party.” In this refreshing and reinvigorating new book, a leader who has been through the fire lays out a better way forward, one that lifts up reasoned ideas, expands the party, and positions the GOP to win back the White House in 2024.

Geoff Duncan: A lifelong Republican, Geoff Duncan serves as lieutenant governor of Georgia, where he has earned a national reputation for fighting misinformation and standing firmly on principle during the aftermath of the 2020 Election, despite being in the crosshairs of the President of the United States. His ordeal led him to imagine a better way forward for his party – a vision he calls GOP 2.0.

Geoff lived in seven states before moving to Georgia with his family and then attending Georgia Tech on a baseball scholarship before being drafted to play professional baseball. He pitched for six seasons in the minor leagues during which he lived in four more states. He returned to Georgia with his wife Brooke, became a successful entrepreneur, and began raising three boys; he has coached their sports teams almost every season.

After serving in the Georgia House of Representatives, Geoff staged a winning underdog campaign for lieutenant governor. As a statewide leader, he has brought diverse interests together on issues like rural healthcare, tax reform, technology, and hate crimes. He has also advocated for conservative policy solutions that build partnerships between government and the 4Cs: Churches, Charities, Corporations, and Citizens. He has earned trust from both parties for consistently putting policy over politics.

Geoff believes the Republican’s Party’s future lies in building larger coalitions by pursuing common-sense conservative Policies; showing real Empathy; and employing a better Tone. His bold and positive message has made him a national leader and voice for a reinvigorated party – a GOP 2.0 – that can reclaim the House, Senate, and White House.