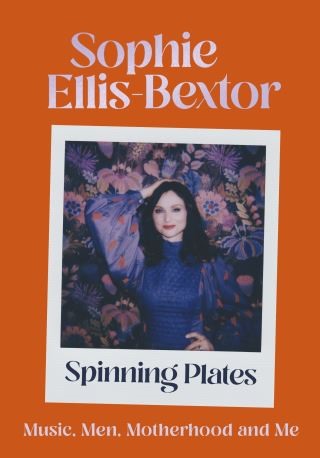 Music, Men, Motherhood and Me: TALES FROM OUR FAVOURITE 24 HOUR KITCHEN DISCO QUEEN

AS SEEN ON CHILDREN IN NEED'S 24 HOUR KITCHEN DISCO DANCEATHON!!!

'A cracking read. Sophie's voice is all the way through this.' - LORRAINE, ITV

'A cheering and relatable book' - PSYCHOLOGIES

SOPHIE ELLIS-BEXTOR - SINGER, WRITER AND QUEEN OF THE KITCHEN DISCO, BRINGS HER DOWN TO EARTH HONESTY AND OPTIMISITC SPARKLE TO HER FIRST BOOK.

In SPINNING PLATES Sophie writes openly about her life. From a childhood flogging Blue Peter badges in the playground to joining Theaudience straight from school, to finding love after a troubled relationship, and becoming mother to five boys. By choosing to speak on issues close to her heart, Sophie invites all of us to join the conversation and bring the trickier subjects out of the shadows and into the light.

Covering relationships, good-enough parenting, the highs - and the lows - of competing on Strictly Come Dancing and Dad Jokes - Sophie writes about the things that take on greater and lesser importance. This is a book about not being afraid to smash a few plates for the sake of what we actually need, want and value.

Sophie Ellis-Bextor shot to fame as a vocalist on Spiller's huge number one single, 'Groovejet' and with her worldwide smash hit, 'Murder on the Dancefloor'.

Her debut solo album, 'Read My Lips', was released in 2001 and sold more than 2 million copies worldwide. Her subsequent album releases include 'Shoot from the Hip' (2003), 'Trip the Light Fantastic' (2007) and 'Make a Scene' (2011). In 2014, Sophie released her album 'Wanderlust' on her own label EBGB's, which was co-written and produced by Ed Harcourt. It was a critical and commercial success spending 3 weeks in the UK top 10 and selling over 100,000 copies.

Sophie followed this with 2016's 'Familia'. In 2019, with Ed Harcourt as Producer and Amy Langley (of Dirty Pretty Strings) arranging, Sophie released orchestrated versions of all her hits with her orchestral greatest hits album 'The Song Diaries'.

In 2020 and 2021, her Kitchen Discos, performed at home during lockdown with her five sons and recorded by her husband, musician Richard Jones, were watched and enjoyed by millions around the world. Following the performances, she released 'Songs From The Kitchen Disco', bringing together Sophie's hits with many other songs from her phenomenally successful lockdown Kitchen Disco performances, garnering further critical acclaim and another top 10 UK album chart position.