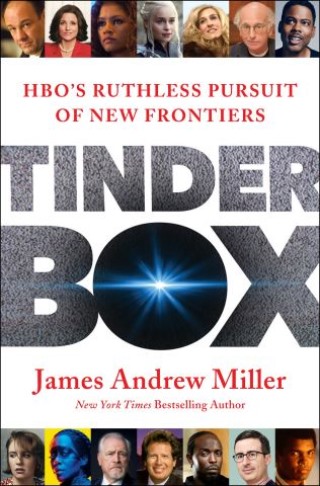 Tinderbox tells the exclusive, explosive, uninhibited true story of HBO and how it burst onto the American scene and screen to detonate a revolution and transform our relationship with television forever.

The Sopranos, Game of Thrones, Sex and the City, The Wire, Succession…HBO has long been the home of epic shows, as well as the source for brilliant new movies, news-making documentaries, and controversial sports journalism. By thinking big, trashing tired formulas, and killing off cliches long past their primes, HBO shook off the shackles of convention and led the way to a bolder world of content, opening the door to all that was new, original, and worthy of our attention.

In Tinderbox, award-winning journalist James Andrew Miller uncovers a bottomless trove of secrets and surprises, revealing new conflicts, insights, and analysis. As he did to great acclaim with SNL in Live from New York; with ESPN in Those Guys Have All the Fun; and with talent agency CAA in Powerhouse, Miller continues his record of extraordinary access to the most important voices, this time speaking with talents ranging from Abrams (J. J.) to Zendaya, as well as every single living president of HBO—and hundreds of other major players.

Over the course of more than 750 interviews with key sources, Miller reveals how fraught HBO’s journey has been, capturing the drama and the comedy off-camera and inside boardrooms as HBO created and mobilized a daring new content universe, and, in doing so, reshaped storytelling and upended our entertainment lives forever.

James Andrew Miller: James Andrew Miller is an award-winning journalist and the bestselling author of Those Guys Have All the Fun: Inside the World of ESPN; Live from New York: The Complete, Uncensored History of Saturday Night Live; Powerhouse: The Untold Story of Hollywood’s Creative Artists Agency; and Running in Place: Inside the Senate. He received his BA from Occidental College, his MLitt from Oxford University, and an MBA from Harvard University.