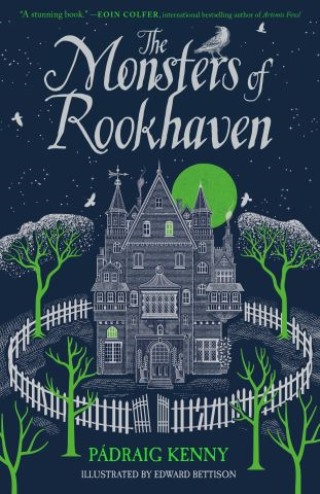 From award-winning author Pádraig Kenny comes an action-packed middle grade fantasy about a family of monsters, perfect for fans of Jonathan Auxier and Victoria Schwab.

Mirabelle is part of a very unusual family. Between Uncle Bertram transforming into a ferocious grizzly bear and Aunt Eliza’s body being made entirely of spiders, it’s safe to say they are an extraordinary lot.

To the human residents of Rookhaven Village, the family is a threat. So long ago, a treaty was reached between them—in return for sundries and supplies, the monsters won’t eat the townspeople—and an invisible glamour was set around the perimeter of the Manor to keep strangers out.

But the glamour serves a second purpose: to keep Mirabelle and her family hidden from those who would do them harm. When two orphans—siblings Jem and Tom—stumble upon a tear in the magical field and open a door that was meant to stay locked, Mirabelle and her family are put in grave danger. A very real monster has locked onto their scent, and he has a hunger for their kind.

At turns chilling and thought-provoking, and stunningly illustrated by Edward Bettison, Pádraig Kenny’s The Monsters of Rookhaven explores difference and empathy through the eyes of characters you won’t soon forget.