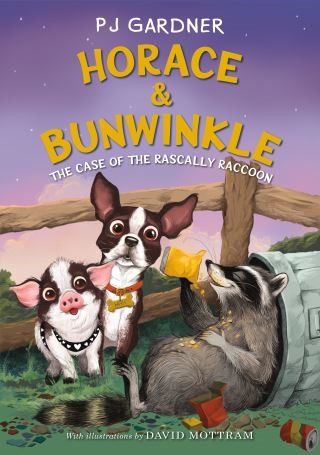 Horace & Bunwinkle: The Case of the Rascally Raccoon

The second book in a young middle grade mystery-adventure series about Horace, an anxious Boston Terrier, and Bunwinkle, an exuberant potbellied pig, who team up to solve crimes in their barnyard and local neighborhood—perfect for fans of Mercy Watson, The Trouble with Chickens, and A Boy Called Bat.

Horace is flying high after solving the pet-tectives' first mystery. But Bunwinkle just hasn’t been herself—she’s scared all the time and is too embarrassed to tell anyone.

Before they can work on getting Bunwinkle’s confidence back, a new case lands in their laps—well, actually their trash cans—when Shoo the raccoon asks for help. The neighborhood humans think he’s behind a series of garbage upheavals and home break-ins—but he swears he’s innocent. Just because people call him a trash bandit doesn’t mean he is one.

To make matters worse, while the pet-tectives are trying to clear Shoo’s name, they learn that Eleanor is having money problems. She hopes to solve them by starting a community Farmer’s Market in the back field. The neighbors seem excited to help at first but then, one by one, they suddenly drop out.

With time running out, can the pet-tectives solve the mysteries and save Shoo and the Homestead?

PJ Gardner is the author of the middle grade Horace & Bunwinkle series. She lives in Southern California with her husband and sons, as well as her Boston Terriers, Rosie and Rocky. Visit her at pjgardnerswitzer.com.