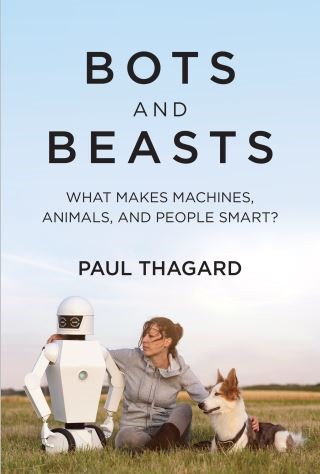 An expert on mind considers how animals and smart machines measure up to human intelligence.

Octopuses can open jars to get food, and chimpanzees can plan for the future. An IBM computer named Watson won on Jeopardy! and Alexa knows our favorite songs. But do animals and smart machines really have intelligence comparable to that of humans? In Bots and Beasts, Paul Thagard looks at how computers ("bots") and animals measure up to the minds of people, offering the first systematic comparison of intelligence across machines, animals, and humans.

Thagard explains that human intelligence is more than IQ and encompasses such features as problem solving, decision making, and creativity. He uses a checklist of twenty characteristics of human intelligence to evaluate the smartest machines--including Watson, AlphaZero, virtual assistants, and self-driving cars--and the most intelligent animals--including octopuses, dogs, dolphins, bees, and chimpanzees. Neither a romantic enthusiast for nonhuman intelligence nor a skeptical killjoy, Thagard offers a clear assessment. He discusses hotly debated issues about animal intelligence concerning bacterial consciousness, fish pain, and dog jealousy. He evaluates the plausibility of achieving human-level artificial intelligence and considers ethical and policy issues. A full appreciation of human minds reveals that current bots and beasts fall far short of human capabilities.

Paul Thagard: Paul Thagard, a philosopher and cognitive scientist, is Distinguished Professor Emeritus of Philosophy at the University of Waterloo. He is the author of Brain-Mind, Natural Philosophy, The Cognitive Science of Science, Hot Thought, Mind: Introduction to Cognitive Science (the last three published by the MIT Press), and many other books. He writes a popular blog for Psychology Today and can be found at paulthagard.com.