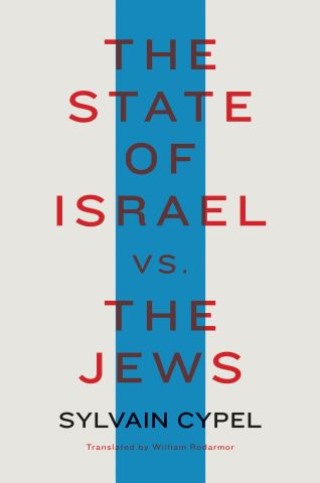 The State of Israel vs. the Jews

From an award-winning journalist, a perceptive study of how Israel’s actions, which run counter to the traditional historical values of Judaism, are putting Jewish people worldwide in an increasingly untenable position.

More than a decade ago, the historian Tony Judt considered whether the behavior of Israel was becoming not only “bad for Israel itself” but also, on a wider scale, “bad for the Jews.” Under the leadership of Benjamin Netanyahu, this issue has grown ever more urgent. In The State of Israel vs. the Jews, veteran journalist Sylvain Cypel addresses it in depth, exploring Israel’s rightward shift on the international scene and with regard to the diaspora.

Cypel reviews the little-known details of the military occupation of Palestinian territory, the mindset of ethnic superiority that reigns throughout an Israeli “colonial camp” that is largely in the majority, and the adoption of new laws, the most serious of which establishes two-tier citizenship between Jews and non-Jews. He shows how Israel has aligned itself with authoritarian regimes and adopted the practices of a security state, including the use of technologies such as the software that enabled the tracking and, ultimately, the assassination of Saudi Arabian journalist Jamal Khashoggi. Lastly, The State of Israel vs. the Jews examines the impact of Israel’s evolution in recent years on the two main communities of the Jewish diaspora, in France and the United States, considering how and why public figures in each differ in their approaches.

Sylvain Cypel: Sylvain Cypel is a writer for Le 1, the magazine America, and the online news website Orient XXI. He is a former senior editor at Le Monde, which he joined in 1998 as deputy head of the international section, following a five-year tenure as editor in chief of Courrier International. From 2007 to 2013 he was Le Monde’s permanent US correspondent in New York. Cypel holds degrees in sociology, contemporary history, and international relations, the last of which he earned at the University of Jerusalem. He lived in Israel for twelve years and is now based in Paris. His book Walled: Israeli Society at an Impasse was published by Other Press in 2007.

William Rodarmor has translated some forty-five books and screenplays in genres ranging from literary fiction to espionage and fantasy. In 2017 he won the Northern California Book Award for fiction translation for The Slow Waltz of Turtles by Katherine Pancol. His recent translations include And Their Children After Them by Nicolas Mathieu (2020) and Article 353 by Tanguy Viel (2019).