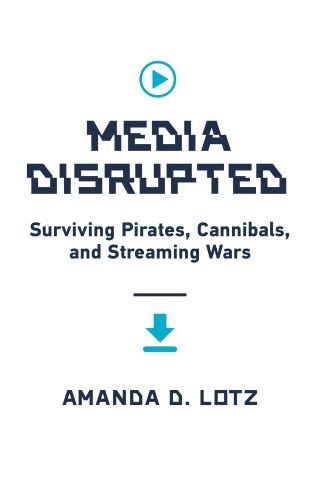 How the internet disrupted the recorded music, newspaper, film, and television industries and what this tells us about surviving technological disruption.

Much of what we think we know about how the internet "disrupted" media industries is wrong. Piracy did not wreck the recording industry, Netflix isn't killing Hollywood movies, and information does not want to be free. In Media Disrupted, Amanda Lotz looks at what really happened when the recorded music, newspaper, film, and television industries were the ground zero of digital disruption. It's not that digital technologies introduced "new media," Lotz explains; rather, they offered existing media new tools for reaching people.

For example, the MP3 unbundled recorded music; as the internet enabled new ways for people to experience and pay for music, the primary source of revenue for the recorded music industry shifted from selling music to licensing it. Cable television providers, written off as predigital dinosaurs, became the dominant internet service providers. News organizations struggled to remake businesses in the face of steep declines in advertiser spending, while the film industry split its business among movies that compelled people to go to theaters and others that are better suited for streaming. Lotz looks in detail at how and why internet distribution disrupted each industry. The stories of business transformation she tells offer lessons for surviving and even thriving in the face of epoch-making technological change.

Amanda D. Lotz: Amanda D. Lotz is Professor at the Queensland University of Technology, where she also leads the Transforming Media Industries research project in the Digital Media Research Centre. She is the author of We Now Disrupt This Broadcast: How Cable Transformed Television and the Internet Revolutionized It All (MIT Press) and other books. Her articles about the business of television have been published by Fortune, Business Insider, Salon, and The New Republic.