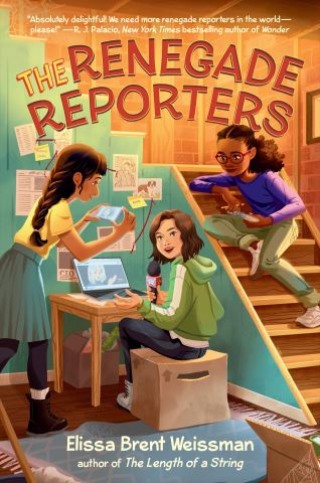 When Ash gets kicked off her school's news show, she becomes a renegade reporter--and makes a big discovery about technology and her fellow students' privacy.

Ash and her friends are reporters. They were ready to lead their school news show, The News at Nine, sponsored by Van Ness Media, when an unfortunate incident involving a dancing teacher, an irresponsibly reported story, and a viral video got them kicked off the crew. So Ash, Maya, and Brielle decide to start their own news show, The Underground News. And soon they stumble on a big lead: Van Ness Media, the educational company that provides their school's software, has been gathering data from all the kids at school. Their drawings, their journals, even their movements are being recorded and cataloged by Van Ness Media. But why? Ash and her friends are determined to learn the truth and report it.

Elissa Brent Weissman: Elissa Brent Weissman is the award-winning author of several middle grade novels, including The Length of a String, the Nerd Camp series, and the editor of Our Story Begins, an anthology of writing and art by today's kids' book creators back when they were kids themselves. She is a graduate of Johns Hopkins University and earned a master's degree in children's literature at the University of Roehampton in London. After spending many years in Baltimore, where she taught creative writing to children, college students, and adults and was named one of CBS Baltimore's Best Authors in Maryland, Elissa currently lives with her family in Christchurch, New Zealand.