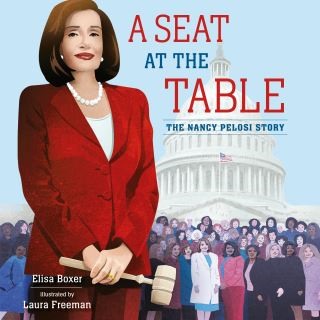 A Seat at the Table

This inspiring picture-book biography about Nancy Pelosi shows her journey from the child of Baltimore's mayor to her marble-ceiling-shattering four terms as Speaker of the House, including the historic events of January 6th, 2021.


Nancy Pelosi grew up watching her father, the mayor of Baltimore, welcome in people of all different backgrounds to sit at their table and make their voices heard. Nancy's mother always stood beside him, working behind the scenes to help her husband and the people he served. When Nancy grew up, she continued working behind the scenes in politics until a friend asked her to run for Congress herself--jump-starting a 33 year career as a political representative and taking her higher than she could have once imagined.

Young girls, especially, will be inspired by Nancy's journey and her commitment to using her voice to help others and to make sure women are heard in government. The backmatter also includes an exclusive interview with Nancy Pelosi herself.

Elisa Boxer: Elisa Boxer is a Maine-based, Emmy-winning journalist and columnist whose writing has appeared in publications including The New York Times, Inc. and Fast Company. Having worked in newspaper, magazine and television journalism, Elisa is thrilled to bring her reporting and storytelling skills to the world of children's literature. She is especially drawn to stories of unsung heroes like the ones featured in her first book, The Voice That Won the Vote: How One Woman's Words Made History. Visit her at elisaboxer.com

Laura Freeman received her BFA from the School of Visual Arts and began her career working for various editorial clients. She has illustrated over thirty children's books, including Hidden Figures written by Margot Lee Shetterly, Kamala Harris by Nikki Grimes, the forthcoming The Faith of Elijah Cummings by Carole Boston Weatherford, and the Nikki & Deja series by Karen English. In addition to illustrating books and editorial content, her art can be found on a wide range of products, from dishes and textiles to greeting cards. Originally from New York City, she now lives in Atlanta with her husband and their two children.