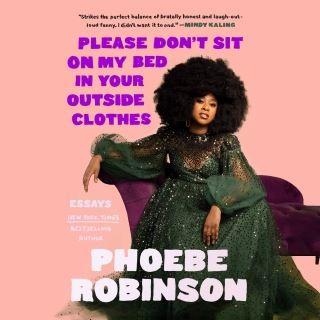 Please Don't Sit on My Bed in Your Outside Clothes

With sharp, timely insight, pitch-perfect pop culture references, and her always unforgettable voice, New York Times bestselling author, comedian, actress, and producer Phoebe Robinson is back with her most must-read book yet.

In her brand-new collection, Phoebe shares stories that will make you laugh, but also plenty that will hit you in the heart, inspire a little bit of rage, and maybe a lot of action. That means sharing her perspective on performative allyship, white guilt, and what happens when white people take up space in cultural movements; exploring what it’s like to be a woman who doesn’t want kids living in a society where motherhood is the crowning achievement of a straight, cis woman’s life; and how the dire state of mental health in America means that taking care of one’s mental health—aka “self-care”—usually requires disposable money.

She also shares stories about her mom slow-poking before a visit with Mrs. Obama, the stupidly fake reassurances of zip-line attendants, her favorite things about dating a white person from the UK, and how the lack of Black women in leadership positions fueled her to become the Black lady boss of her dreams. By turns perceptive, laugh-out-loud funny, and heartfelt, Please Don’t Sit on My Bed in Your Outside Clothes is not only a brilliant look at our current cultural moment, it's also a collection that will stay with readers for years to come.

Phoebe Robinson: Phoebe Robinson is a stand-up comedian, writer, producer, and actress. She is best known as the cocreator and costar of the hit podcast and series of TV specials 2 Dope Queens. She’s also the New York Times bestselling author of You Can’t Touch My Hair: And Other Things I Still Have to Explain and Everything’s Trash, But It’s Okay. Additionally, Phoebe has starred in the movies Ibiza and What Men Want, and was moderator on Michelle Obama’s international Becoming book tour. Most recently, Phoebe launched Tiny Reparations, a production company under ABC Signature, whose first project is a talk show entitled Doing the Most with Phoebe Robinson that premiered in April 2021 on Comedy Central.