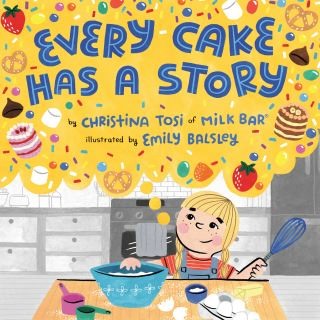 Every Cake Has a Story

From Christina Tosi, the playful creator of the popular bakery Milk Bar, this is the story of a girl whose delicious dream comes to life, filling the world with color, creativity, and joy. Original recipe included!

Everything in Samesville is exactly the same, from the people and their clothes to the houses and their doors.

So one night before going to bed, Sammi tucks a recipe card under her pillow and wishes that things were not the same. And when she wakes up, that white, black, gray sameness is gone, replaced with things that are bolder and brighter and wilder than ever before!

With her newly colorful world and a new recipe book, she gathers her friends and makes the most magical cake, beautiful and different--just like Sammi and her friends.

Things will never be the same again.

Christina Tosi: Christina Tosi is the two-time James Beard Award-winning chef and owner of Milk Bar. Known for baking outside of the lines and turning dessert on its head, Christina founded Milk Bar in 2008, now with 16 locations throughout the country. Christina has been a judge on Fox's Master Chef and Master Chef Junior series, and was the only woman and only American baker featured on the hit Netflix docu-series, Chef's Table: Pastry.

Emily Balsley is an illustrator who spends her days creating in her color studio in Madison, WI. Her freelance clients include American Girl, Mudpuppy, Highlights Magazine, and Storey Publishing; the UW Memorial Union, Food Fight Restaurants, and Madison Magazine. When she isn't making, she loves to ride her bike, box, and spend time with her family and friends.