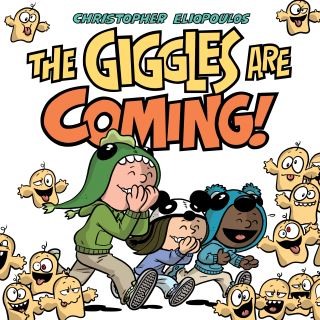 The Giggles Are Coming

A couple of friends can't keep from laughing during class on the first day of school, in this companion to The Yawns Are Coming from the illustrator of the Ordinary People Change the World series!

Two best friends are so excited to go back to school. They're in the same class, their classroom is full of art supplies, and they've even made a new friend. But then it happens: Just as the teacher introduces herself, the GIGGLES show up! They're everywhere and impossible to escape. And as if that wasn't embarrassing enough, soon a GUFFAW shows up, and then the CHUCKLES! What will their teacher think if they can't avoid laughing in the middle of her first lesson?

Christopher Eliopoulos: Christopher Eliopoulos is the author/illustrator of The Yawns Are Coming and the illustrator of the New York Times bestselling Ordinary People Change the World series of picture book biographies. He began his illustration career as a letterer for Marvel and has worked on thousands of comics, including his own Cosmic Commandos and Monster Mayhem graphic novels. He lives in New Jersey with his wife and their identical twin sons (when the boys are home from college).