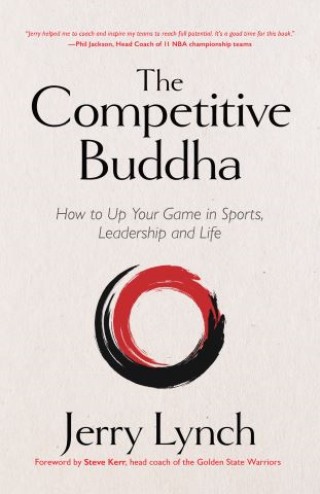 How to Up Your Game in Sports, Leadership and Life (Book on Buddhism, Sports Book, Guide for Self-Improvement)

Buddha Can Improve Your Sports Performance and Life

“No other person has had more influence on my thirty-six years of coaching than Jerry Lynch.”—Missy Foote, Head women's lacrosse coach, Middlebury College

The Competitive Buddha is about mastery, leadership, spirituality, and the Kobe Bryant Mamba Mentality. Discover how people from all parts of the world have brought together the Buddha and athletics for greater fun, enjoyment, and pleasure during their performances.

On the court, field, and beyond. Dr. Lynch is an avid runner and biker and he has coached athletes at the high school and AAU level. He earned his doctorate in psychology at Penn State University and has done extensive post-doctoral work in the area of philosophy, Taoist and Buddhist thought, comparative religions, leadership development, and performance enhancement. Dr. Jerry Lynch demonstrates how certain timeless core Buddha values inspire you to embrace and navigate unchartered waters and understand the Buddha-mind and the Kobe Bryant Mamba Mentality.

Become a master coach of your own life. When it comes to leadership and coaching, The Competitive Buddha teaches how the best coaches today use the ancient methods for our modern times. Learn specific strategies and techniques for implementing this special way to guide and lead.

Readers who enjoyed Win the Day, Mamba Mentality, or Relentless Optimism will love The Competitive Buddha.

Jerry Lynch first learned about extraordinary performance and excellence as a nationally ranked competitive athlete sponsored by Nike, running world class times from 5,000 meters to the marathon, winning a National Championship and many other races against athletes half his age. He took what he learned about himself and life from his competitive days and parlayed it into a dynamic successful career helping athletes and coaches in all sports to use his Buddha performance and leadership strategies to up their game and discover the best version of themselves. His most recent book, The Competitive Buddha, is emblematic of his journey of excellence and will serve as a guide for anyone who wishes to join the journey.

To give a clearer sense about his professional life as an author, leader, coach and mentor, Jerry combines Eastern thought, Native American tradition, Christian mysticism and western psychology to help create focus, mental talent, spiritual dexterity, inspiration and empowerment not only for competitive events but to learn self-awareness, confidence and how to be the best version of yourself each day.

Dr. Lynch has been recognized as one of the top five in his profession nationwide. He has worked with teams, coaches and athletes in the NBA, Pro Lacrosse, National Soccer League, with men's and women's basketball, lacrosse, soccer, tennis, golf and other sports at the universities of North Carolina, Duke, Maryland, California, Syracuse, Stanford, Harvard and Middlebury. In the past 30 years alone, he has been part of 55 Final Four and 39 National Championship teams at the collegiate and professional levels.

Some of his presentations include Keynote Talks at the New Zealand National Academy of Sport, Der Deutsche Schmerztog in Germany, the U.S. National Field Hockey Coaches convention, the Ironman Sports Medicine Conference in Hawaii, the USA Lacrosse National Convention and the NIKE/China Leadership Summit in Lanai, Hawaii.

Dr. Lynch has had extensive media interview coverage with CBS, NBC, and PBS national television, The New York Times, Oprah Magazine, Sports Illustrated, Baltimore Sun, Outside Magazine and over 100 national radio broadcasts, podcasts and webinars. He co-hosts, with John O'Sullivan, the Way of Champions podcast, one of the top rated podcasts in the world for coaches.

Jerry has a doctorate in psychology from Penn State University, and has done extensive post-doctoral work in the area of philosophy, Taoist and Buddhist thought, comparative religions, leadership development, performance enhancement.

He is the author of 14 books in as many as 10 languages on coaching, leadership, spirituality of sport, warrior spirit, peak performance, and sports psychology.

Dr. Lynch is the founder and director of WAY OF CHAMPIONS, a human growth and performance consulting group geared toward helping others master the inner mental and spiritual game for sports, business and life.