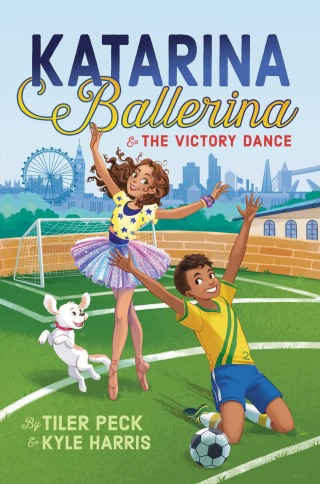 After earning a spot in a prestigious ballet camp, Katarina is excited to meet other dancers from around the world! When she arrives, Katarina becomes fast friends with a boy named Ricky from London. He loves to dance, but also has a passion for soccer.

As the camp comes to a close, Ricky struggles to embrace his identity and tell his teammates back home about his love for dance. Katarina encourages him via her letters as his pen pal, to own his gifts and share them with the world. But will it be enough to help Ricky chase his dreams beyond the soccer field and onto the dance floor?

Tiler Peck: Tiler Peck is an international ballerina and has been a principal dancer with the New York City Ballet since 2009. She has been seen on Broadway in On the Town and The Music Man and originated the role of Marie in The Kennedy Center’s production of Little Dancer, alongside Kyle Harris. Ms. Peck performed for President Obama at the 2012 and 2014 Kennedy Center Honors. Ms. Peck has guested on Dancing with the Stars twice, and recently appeared on Julie Andrews’s Netflix series, Julie’s Greenroom. She is a recipient of the 2013 Princess Grace Statue Award and was named one of Forbes 30 under 30 in Hollywood/Entertainment. Most recently, she was the first woman to curate three performances titled Ballet Now at the Los Angeles Music Center and is the subject of a new documentary directed by Steven Cantor and produced by Elisabeth Moss for Hulu. She lives in New York City with her dog Cali. To learn more about Tiler, follow her on all social media platforms @TilerPeck.|||Kyle Harris is an actor in New York City. He recently starred in Freeform’s hit series Stitchers for three seasons and has appeared on Broadway in The Inheritance and Sondheim on Sondheim. Kyle toured the country as Tony in the Broadway National Tour of West Side Story and starred opposite Tiler Peck in the Broadway bound musical Little Dancer at the Kennedy Center in Washington, DC. Kyle has also appeared on The Carrie Diaries and Beauty and the Beast on the CW, HBO’s High Maintenance, NBC’s The Blacklist Redemption, and God Friended Me on CBS. He has a BFA in musical theater from the University of Arizona and is the son of a second-grade teacher. If it weren’t for his mother introducing him to children’s books at a young age, he knows he wouldn’t be as well rounded and successful in the arts as he is today. To learn more about Kyle, follow him on all social media platforms @KyleHarris.