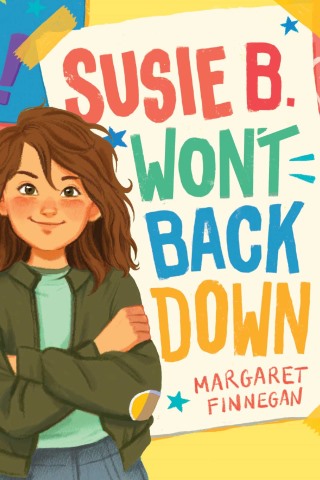 Susie B. Won't Back Down

Roll with It meets Absolutely Normal Chaos in this funny, big-hearted novel about a young girl’s campaign for student council president, told through letters to her hero Susan B. Anthony.

Susie B. has a lot to say. Like how it’s not fair that she has to be called Susie B. instead of plain Susie. Or about how polar bears are endangered. Or how the Usual Geniuses are always getting picked for cool stuff over the kids like her with butterflies in their brain. And it’s because Susie B. has a lot to say about these very important things that she’s running for student council president!

If she’s president, she can advocate for the underdogs just like her hero and fellow Susie B., Susan B. Anthony. (And, okay, maybe the chance to give big speeches to the whole school with a microphone is another perk.) But when the most usual of Usual Geniuses also enters the student council race, Susie realizes this may be a harder won fight than she thought. Even worse, Susie discovers that Susan B. Anthony wasn’t as great as history makes it seem, and she did some pretty terrible things to try to help her own cause. Soon, Susie has her own tough decisions to make. But one thing is for sure—no matter what, Susie B. won’t back down.

Margaret Finnegan: Margaret Finnegan’s work has appeared in FamilyFun, the Los Angeles Times, Salon, and other publications. She lives in South Pasadena, California, where she enjoys spending time with her family, walking her dog, and baking really good chocolate cakes. Connect with her at MargaretFinnegan.com.