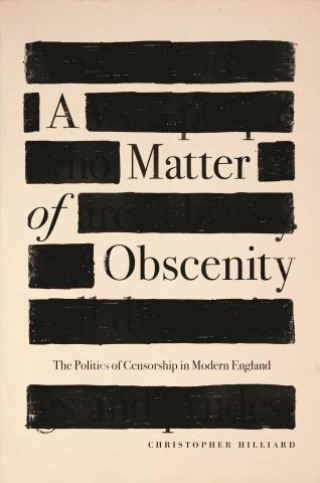 A Matter of Obscenity

The Politics of Censorship in Modern England

A comprehensive history of censorship in modern Britain

For Victorian lawmakers and judges, the question of whether a book should be allowed to circulate freely depended on whether it was sold to readers whose mental and moral capacities were in doubt, by which they meant the increasingly literate and enfranchised working classes. The law stayed this way even as society evolved. In 1960, in the obscenity trial over D. H. Lawrence's Lady Chatterley's Lover, the prosecutor asked the jury, "Is it a book that you would even wish your wife or your servants to read?" Christopher Hilliard traces the history of British censorship from the Victorians to Margaret Thatcher, exposing the tensions between obscenity law and a changing British society.

Hilliard goes behind the scenes of major obscenity trials and uncovers the routines of everyday censorship, shedding new light on the British reception of literary modernism and popular entertainments such as the cinema and American-style pulp fiction and comic books. He reveals the thinking of lawyers and the police, authors and publishers, and politicians and ordinary citizens as they wrestled with questions of freedom and morality. He describes how supporters and opponents of censorship alike tried to remake the law as they reckoned with changes in sexuality and culture that began in the 1960s.

Based on extensive archival research, this incisive and multifaceted book reveals how the issue of censorship challenged British society to confront issues ranging from mass literacy and democratization to feminism, gay rights, and multiculturalism.

Christopher Hilliard: Christopher Hilliard is professor of history at the University of Sydney. His books include The Littlehampton Libels: A Miscarriage of Justice and a Mystery about Words in 1920s England and To Exercise Our Talents: The Democratization of Writing in Britain. Twitter @chrhilli