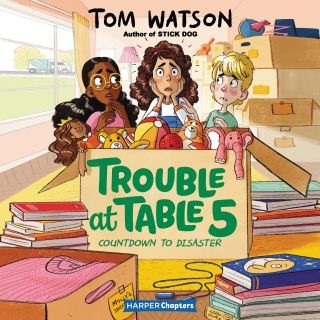 Trouble at Table 5 #6: Countdown to Disaster

From the author of Stick Dog comes the sixth book in an early chapter book series about three best friends whose plans, missions, and schemes are sure to shake up their school.

Uh-oh! Molly’s parents have a secret. They want to move to a new house—maybe even a new town. But Molly can’t leave her best friends Rosie and Simon behind!

Now the trio from Table 5 only have three days to come up with a scavenger hunt that will remind Molly’s parents of all the things they love about their house and neighborhood…before the moving vans come and Molly has to go.