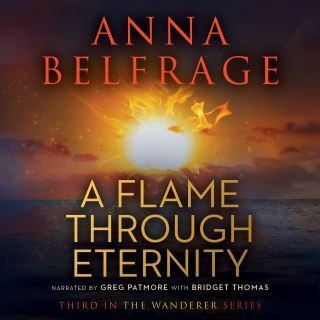 A Flame through Eternity

Meeting up with your fated lover after 3,000 years apart is not bad—at all. Having your ancient nemesis show up at the reunion party is no fun—at all.

Helle may believe in second-chance love, but she sure doesn’t believe in reincarnation. Okay, she didn’t believe in stuff like that until she met Jason Morris a year or so ago. By now, she has accepted that sometimes impossible things are quite, quite possible—like an ancient princess being reborn as an ambitious financial analyst.

Finding Jason was like finding the part of her that had always been missing—a perfect match. But handling Sam Woolf, the reborn version of their ancient nemesis, is something of a trial. No sooner do you have him well and surely beat, but up he bounces again. Sheesh, will it take an oak stake to permanently rid their lives of him?

Sam Woolf is a powerful adversary. Too powerful, even. Jason and Helle will need help from unexpected quarters to finally bring this tangled, ancient love-and-hate triangle to some sort of conclusion. Question is, will they survive the experience?

Had Anna Belfrage been allowed to choose, she’d have become a professional time traveler. As this was impossible, she instead authored the acclaimed Graham Saga, a time-traveling series set in the seventeenth century. Her latest series is set in the 1320s and features Adam de Guirande, his wife Kit, and their adventures during Roger Mortimer’s rise to power.