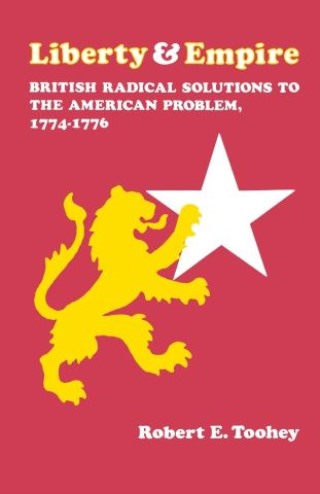 Though little known to most students of the American Revolution, the British Radicals of the 1770s championed the rights of Americans while advocating parliamentary reform and denouncing British colonial policies. Outspoken, eloquent, and innovative, the Radicals encouraged the American cause. They voiced ideas on liberty and empire that would echo through American revolutionary documents.

Liberty and Empire focuses on five British Radicals. The farsighted John Cartwright's ideas of reformation anticipated the Commonwealth of Nations. James Burgh's treatise on parliamentary reform became a classic text for both English and American reformers and an influence on the thinking of successive generations. The venerable Dr. Richard Price wrote one of the era's most eloquent statements on human liberty and the meaning of the American Revolution. Granville Sharp's advocacy of legislative rights for Ireland and America prophesied later principles of responsible government and home rule. Catharine Macaulay, fervent and notorious, urged the people of Great Britain to side with America.

In this first comprehensive study of the British Radicals, Robert Toohey provides an overview of their political milieu and a synthesis of their ideas about the American crisis and related issues. Toohey outlines the ideological relationships among Radicals of diverse background and character. He discusses their impact on American thinking through their writings and their associations with Benjamin Franklin and others. And he reveals that Americans held no monopoly on enlightened concepts of human liberty, empire, and reformation.