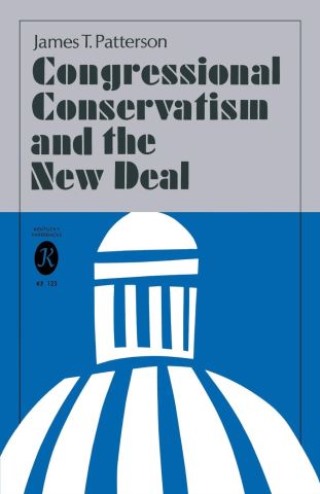 Congressional Conservatism and the New Deal

Faced by the disaster of depression, Congress in the early 1930s proved amenable to the far-reaching demands and programs presented to it by the newly elected President, Franklin D. Roosevelt, but by 1937 it showed increasing resistance, even outright opposition, to many New Deal measures. In this study, James T. Patterson examines this resurgence of conservative strength in Congress, focusing upon the personalities and backgrounds of the men involved and upon the key domestic issues which brought them together in an informal coalition opposed to executive plans, especially for the years 1937–1939.

From the first the Roosevelt Congress had had its "irreconcilables"—men like Carter Glass, Millard Tydings, and Harry Byrd—who viewed the New Deal with dismay, and in the voting on the public utilities holding company bill and the surprise tax measure of 1935 they were joined by a significant number of other congressmen who had hitherto supported the administration. It was, however, Roosevelt's plan to enlarge the Supreme Court that proved to be the turning point. This controversial measure provided a common issue on which conservatives, both Republican and Democratic, could unite—the "irreconcilables," Republicans like Arthur Vandenberg, others like Charles McNary, and nominal Democratic progressives like Burton K. Wheeler. Following this crucial confrontation, the bipartisan conservative coalition was able to control enough votes to oppose the administration on such key measures as the fair labor standards and housing bills of 1937, the reorganization and tax bills of 1938, and the relief and tax bills of 1939. Incited by grievances over patronage, a feeling that the emergency was past, and fears of radicalism, congressmen increasingly asserted their independence of executive leadership.

In this 1966 Organization of American Historians award-winning book, Patterson has provided a new exploration of one of the most significant developments in recent American history-the creation by conservative congressmen of a pattern of cooperation that continues to exert a potent influence upon the course of legislation.