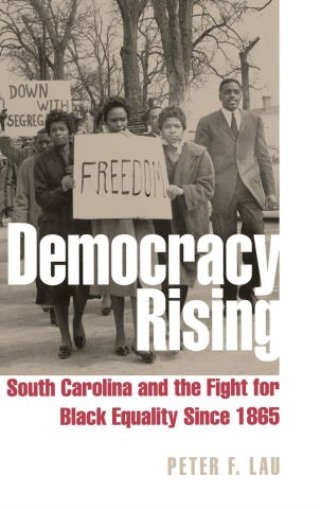 South Carolina and the Fight for Black Equality since 1865

Considered by many historians to be the birthplace of the Confederacy, South Carolina experienced one of the longest and most turbulent Reconstruction periods of all the southern states. After the Civil War, white supremacist leadership in the state fiercely resisted the efforts of freed slaves to secure full citizenship rights and to remake society based upon an expansive vision of freedom forged in slavery and the crucible of war. Despite numerous obstacles, African Americans achieved remarkable social and political advances in the ten years following the war, including the establishment of the state's first publicly-funded school system and health care for the poor. Through their efforts, the state's political process and social fabric became more democratic.

Peter F. Lau traces the civil rights movement in South Carolina from Reconstruction through the early twenty-first century. He stresses that the movement was shaped by local, national, and international circumstances in which individuals worked to redefine and expand the meaning and practice of democracy beyond the borders of their own state. Contrary to recent scholars who separate civil rights claims from general calls for economic justice, Lau asserts that African American demands for civil rights have been inseparable from broader demands for a redistribution of social and economic power. Using the tension between rights possession and rights application as his organizing theme, Lau fundamentally revises our understanding of the civil rights movement in America.

In addition to considering South Carolina's pivotal role in the national civil rights movement, Lau offers a comprehensive analysis of the National Association for the Advancement of Colored People (NAACP) during the height of its power and influence, from 1910 through the years following Brown v. Board of Education (1954). During this time, the NAACP worked to ensure the rights guaranteed to African Americans by the 14th and 15th amendments and facilitated the emergence of a broad-based movement that included many of the nation's rural and most marginalized people.

By examining events that occurred in South Carolina and the impact of the activities of the NAACP, Democracy Rising upends traditional interpretations of the civil rights movement in America. In their place, Lau offers an innovative way to understand the struggle for black equality by tracing the movement of people, institutions, and ideas across boundaries of region, nation, and identity. Ultimately, the book illustrates how conflicts caused by the state's history of racial exclusion and discrimination continue to shape modern society.

Peter F. Lau: Peter F. Lau, dean of students at The Wheeler School in Providence, Rhode Island, is the editor of Grassroots to the Supreme Court: Brown v. Board of Education and American Democracy.