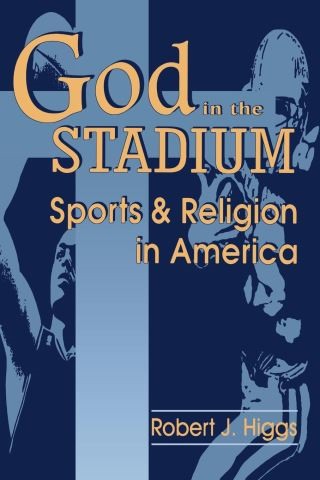 God In The Stadium

Sports and Religion in America

From the worship of Michael Jordan to the downfall of O.J. Simpson, it has become clear that sports and sports heroes have assumed a role in American society far out of proportion to their traditional value. In this powerful critique of present-day American popular culture, Robert J. Higgs examines the complex and increasingly pervasive control that sports wield in shaping the national self-image. He provides a thoughtful history and analysis of how sports and religion have become intertwined and offers a stinging indictment of the sports-religion-media-education complex.

Beginning with the place of sports in Puritan life, Higgs traces the contributions of various individuals and institutions to the present circumstances in which sports and religion are joined. He discusses the transfer of the Puritan ideal to the New World and then moves to the revolutionary period of the national hero and manifest destiny, through the classic period of education for a sound mind in a sound body, to the imperial phase of American supremacy.

In the process of tracing this history Higgs makes clear the growing influence of "muscular" Christianity, from circuit-riding evangelists to pulpit-pounding televangelists, from Billy Sunday to Billy Graham, from the YMCA to the Fellowship of Christian Athletes. Finally he arrives at our present Low Roman or "bread and circuses" period in which sports simultaneously serve the purposes of entertainment, religious proselytism, distraction of the masses, and political propaganda, all under the colorful banner of Christian knighthood as seen in the stadium revivals of Billy Graham and the sporting enthusiasm of Jerry Falwell.

In brief, sports and Christianity have followed similar paths. In the beginning they were nationalized, then Hellenized, then Romanized, and, in our own time, televised. The result is that spectator sports have become the reigning American religion, one sharply at odds with a traditional shepherd ethos.

This well-written and innovative book makes clear the dangerous power wielded by the sports-religion-media-education complex over the minds and energies of the American people. It is a call for recognition and reevaluation of our present situation that will concern anyone interested in the future of American culture.

Robert J. Higgs: Robert J. Higgs is professor emeritus of English at East Tennessee State University. He is the author of Laurel and Thorn: The Athlete in American Literature and numerous articles on sports and cultural history.