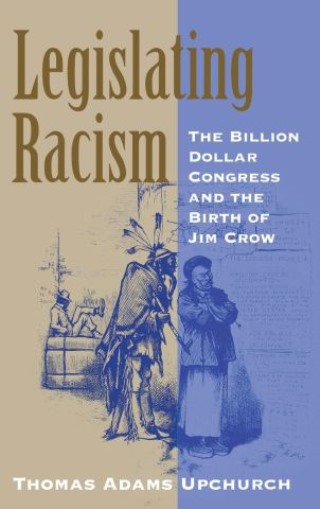 The Billion Dollar Congress and the Birth of Jim Crow

The Civil War and Reconstruction were characterized by two lasting legacies—the failure to bring racial harmony to the South and the failure to foster reconciliation between the North and South. The nation was left with a festering race problem, as a white-dominated society and political structure debated the +proper role for blacks. At the national level, both sides harbored bitter feelings toward the other, which often resulted in clashes among congressmen that inflamed, rather than solved, the race problem. No Congress expended more energy debating this issue than the Fifty-First, or "Billion Dollar," Congress of 1889-1891. The Congress debated several controversial solutions, provoking discussion far beyond the halls of government and shaping the course of race relations for twentieth-century America.

Legislating Racism proposes that these congressional debates actually created a climate for the first truly frank national discussion of racial issues in the United States. In an historic moment of unusual honesty and openness, a majority of congressmen, newspaper editors, magazine contributors, and the American public came to admit their racial prejudice against not only blacks, but all minority races. If the majority of white Americans—not just those in the South—harbored racist sentiments, many wondered whether Americans should simply accept racism as the American way. Thomas Adams Upchurch contends that the Fifty-First Congress, in trying to solve the race problem, in fact began the process of making racism socially and politically acceptable for a whole generation, inadvertently giving birth to the Jim Crow era of American history.