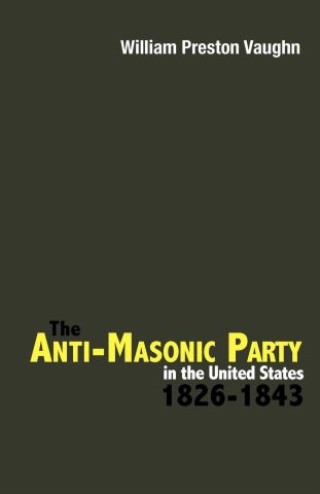 The Anti-Masonic Party in the United States

Here, for the first time in more than eighty years, is a detailed study of political Antimasonry on the national, state, and local levels, based on a survey of existing sources. The Antimasonic party, whose avowed goal was the destruction of the Masonic Lodge and other secret societies, was the first influential third party in the United States and introduced the device of the national presidential nominating convention in 1831.

Vaughn focuses on the celebrated "Morgan Affair" of 1826, the alleged murder of a former Mason who exposed the fraternity's secrets. Thurlow Weed quickly transformed the crusading spirit aroused by this incident into an anti-Jackson party in New York. From New York, the party soon spread through the Northeast. To achieve success, the Antimasons in most states had to form alliances with the major parties, thus becoming the "flexible minority."

After William Wirt's defeat by Andrew Jackson in the election of 1832, the party waned. Where it had been strong, Antimasonry became a reform-minded, anti-Clay faction of the new Whig party and helped to secure the presidential nominations of William Henry Harrison in 1836 and 1840. Vaughn concludes that although in many ways the Antimasonic Crusade was finally beneficial to the Masons, it was not until the 1850s that the fraternity regained its strength and influence.