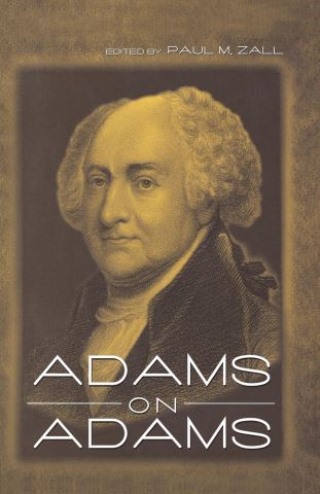 After more than two hundred years in the shadows of Washington and Jefferson, John Adams enjoys fame as one of our top presidents. Of unprepossessing appearance and feisty temperament, he expressed his personal feelings in copious correspondence and public documents along with two unfinished autobiographies.

Paul M. Zall draws from Adams's own letters, diaries, notes and autobiographies to create a fresh portrait. Adams's writings, both public and private, trace his rise from country lawyer to the nation's highest office by the sheer force of his personality. Lacking the advantages of money, connections, class, or patronage, Adams used "the severest and most incessant labor" to promote American independence.

Zall's commentary illuminates Adams's words, focusing on how Adams's inner strengths—in conflict with a sense of inferiority and an obsession with fame—helped win government under law at home and national respect abroad. Borne along by an irresistible sense of Spartan duty and refusing to compromise high principles for cheap popularity, he sacrificed family, fortune, and even fame. In Adams on Adams we are at last able to hear Adams describe his extraordinary journey in his own words.