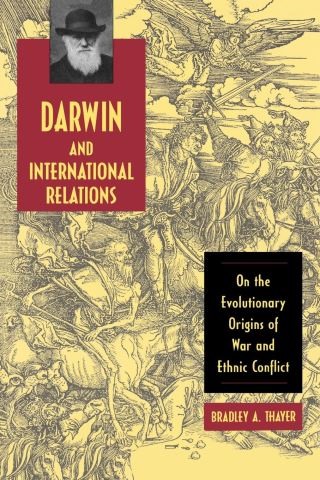 On the Evolutionary Origins of War and Ethnic Conflict

Pathbreaking and controversial, Darwin and International Relations offers the first comprehensive analysis of international affairs of state through the lens of evolutionary theory. Bradley A. Thayer provides a new method for investigating and explaining human and state behavior while generating insights into the origins of human and animal warfare, ethnic conflict, and the influence of disease on international relations.

Using ethnological and statistical studies of warfare among tribal societies, Thayer argues that humans wage war for reasons predicted by evolutionary theory—to gain and protect vital resources but also for the physically and emotionally stimulating effects of combat. Thayer demonstrates that an evolutionary understanding of disease will become a more important part of the study of international relations as new strains of diseases emerge and advances in genetics make biological warfare a more effective weapon for states and terrorists. He also explains the deep causes of ethnic conflict by illuminating how xenophobia and ethnocentrism evolved in humans. He notes that these behaviors once contributed to our ancestors' success in radically different environments, but they remain a part of us. Darwin and International Relations makes a major contribution to our understanding of human history and the future of international relations.

Bradley A. Thayer: Bradley A. Thayer is associate professor of political science at the University of Minnesota-Duluth and co-author of America's Achilles' Heel: Nuclear, Biological, and Chemical Weapons Terrorism and Covert Attack.