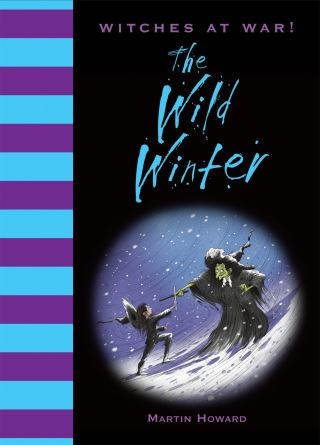 Witches at War!: The Wild Winter

As you’ll recall, the previous book in the series ended with a shocking revelation. Now, Sam and her mentor, the incompetent and rude but strangely likeable Esmelia Sniff, have been separated and evil is beginning to dominate the world.

It’s the longest, coldest winter since records began and the newspapers are reporting sightings of strange and evil creatures making their way towards the Bleak Fortress. Inside the fortress Sam is a prisoner to Diabolica's evil plans while her friend, the potion expert Helza Poppin, is trapped in the dungeon and scheduled for torture.

Martin Howard produces laugh-out-loud books for both children and adults. For children he has written How to Cook Children: A Grisly Recipe Book (Pavilion 2008), the Witches at War! trilogy (Pavilion), and Germs: An Epic Tale on a Tiny Scale (Pavilion 2010) for younger children. His work for adults includes the popular Bad Dog's Diary series (Portico) and One Grump or Two, under the pseudonym Arthur Grump (Portico 2008). Martin lives in the south of France with his wife and three children.

Luigi spent three years in Milan studying Illustration and Multimedia Animation at the European Institute of Design, where he specialized in illustration. He also studied at the Academy of Art University of San Francisco.  He now works internationally through Advocate Art.

Luigi has illustrated books such as "The Curse of Capistrano" for the Oxford University Press and "Hodja and the Thief" and "The Game" for Brown Publishing Network. He is author of various book covers and posters around the world. His illustrative work has also featured on posters for theatre companies, and in a video called "Painting Motion" for a theatre show in Milan.