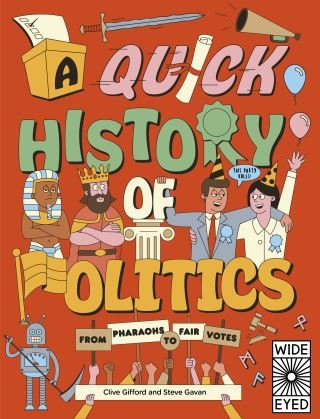 A Quick History of Politics

From Pharaohs to Fair Votes

How did ancient people make decisions? How do the people in power stay in power? Why did Karl Marx have to go without trousers? A Quick History of Politics answers these questions and more, taking a ride through time from plutocrats to people power.

What do you think of when you hear "politics?" Is it grey-haired men in suits, shouting at each other in a weird room? Well, you’re partly right… but there’s also a whole lot of crazy stories and weird history in the political world. A Quick History of Politics takes a look at the silly side of government, big and small, throughout the ages, and also explains the important stuff, like suffrage, elections and getting your voice heard.

Plus, read about the women who used ju-jitsu to campaign for equal rights, the dictator who banned beards, and the rhino that became a council member in Brazil. Learn how the media can swing things in modern elections and get savvy to fake news. Test your knowhow with a quiz at the back of the book.

Packed with facts and jokes and perfect for introducing young readers to big concepts, the latest in the Quick Histories series is here to make politics funny again.

Clive Gifford: Clive Gifford has traveled to more than 70 countries, climbed rocket launch towers, ridden on robots, and flown gliders. He's had more than 200 books published and has received nominations for or won Royal Society, School Library Association, Smithsonian, and TES awards. He won the Blue Peter Book Award for Best Book with Facts 2019 for his title The Colors of History (QEB). Clive lives in Manchester, UK.