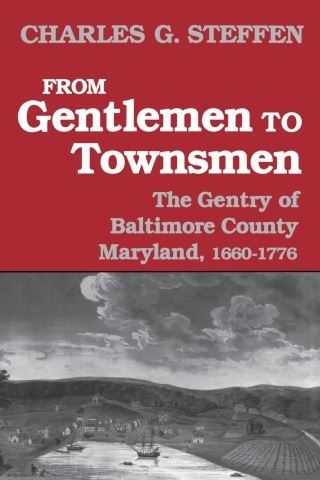 From Gentlemen to Townsmen

Economic and social life in the upper Chesapeake during the colonial period diverged from that in southern Maryland and Tidewater Virginia despite similar economic bases. Charles Steffen's book offers a fresh interpretation of the economic elite of Baltimore County and challenges the widely accepted view that the life of this privileged class was characterized by permanence, stability, and continuity.

The subjects of this study are not the tiny knot of Tidewater aristocrats who have dominated scholarly inquiry, but the numerically predominant but largely unknown "county gentry" who constituted the bedrock of the upper class throughout Maryland and Virginia. Because most Tidewater aristocrats shunned the northern frontier of Chesapeake society, Baltimore proves an ideal location for exploring the uncertain world of the county gentry.

Most of the men who climbed the ladder of economic and political success in Baltimore, hoping to establish dynasties, watched with dismay as their children slipped back down that ladder in the later colonial years. The absence of entrenched oligarchies gave to the upper levels of county society a striking degree of fluidity and impermanence. In chapters dealing with the plantation workforce, the landed estate, the merchant community, and the established church, Steffen demonstrates that this openness pervaded all dimensions of the life of the gentry.

Steffen's analysis of the complicated social and political realignments produced by the Revolution provides a fitting conclusion to his study, for in the independence struggle the openness of the gentry was most clearly revealed. In its vivid portrayal of the men and women who comprised the bulk of the gentry, From Gentlemen to Townsmen sheds new light on the complex economic and social life of the Chesapeake.

Charles G. Steffen: Charles G. Steffen is associate professor of history at Georgia State University and author of The Mechanics of Baltimore: Workers and Politics in the Age of Revolution.