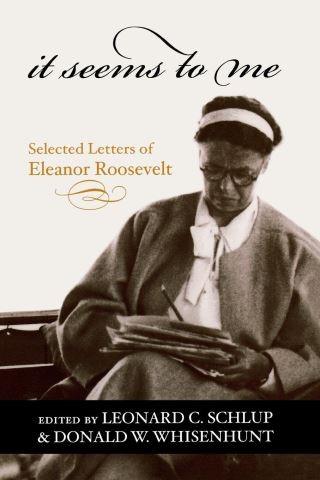 It Seems to Me

One of the most important women of the 20th Century, Eleanor Roosevelt (1884-1962) was also one of its most prolific letter writers. Yet never before has a selection of her letters to public figures, world leaders, and individuals outside her family been made available to general readers and to historians unable to visit the archives at Hyde Park.

It Seems to Me demonstrates Roosevelt's significance as a stateswoman and professional politician, particularly after her husband's death in 1945. These letters reveal a dimension of her personality often lost in collections of letters to family members and friends, that of a shrewd, self-confident woman unafraid to speak her mind. In her letters, Roosevelt lectured Truman, badgered Eisenhower, and critiqued Kennedy. She disagreed with the Catholic Church over aid to parochial schools, made recommendations for political appointments, expressed her opinion on the conviction of Alger Hiss.

Some letters demonstrate her commitment to civil rights, many her understanding of Cold War politics, and still others her support of labor unions. As a whole, this collection provides unique insights into both Eleanor Roosevelt's public life, as well as American culture and politics during the decades following World War II.