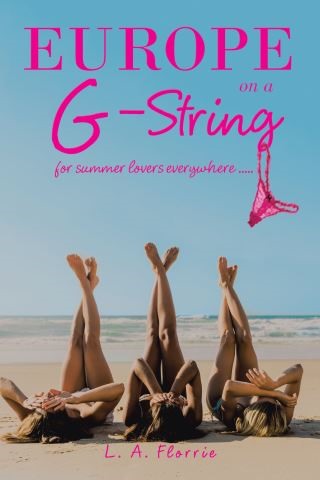 Europe on a G-String

When three friends decide to throw caution to the wind, quit their full time jobs and travel through Europe for six months, they visualised an adventure they would never forget. And they weren't wrong! More than three decades later, they were still gas-bagging about the absurd situations they found themselves in. From Brisbane to London via the Greek Islands and other intoxicating European countries to boot, their looming escapade would become the topic of conversation for the rest of their lives. Chained to their dreary office desks since school, Brooke, Claire and Lucy had finally had enough of the corporate world. Existing like caged birds Monday to Friday was no longer an option. It was time for them to spread their dormant wings and take flight. Two Geminis and a Capricorn made an interesting travel combination, but when you’re friends till the end, it doesn’t matter what star sign you are, unless of course you’re a Capricorn with Cancer rising and decide to give it all away in Venice, because you fear for your life. The road to Utopia was never meant to be easy, but when you’re filled with hopes and dreams, who cares if you meet some oddballs along the way? From Greek Gods to Italian models. From a repulsive sex crazed Yugoslavian taxi driver, to an irresistible Serbian ex-con. From brushes with the Police in Venice to French thieves on the Metro in Paris, not to mention more than a few shady characters in between, this would certainly be a trip they would never forget. So if you’re looking for fun under the European sun, not to mention some unabashed sex and romance to spice up your every day life, grab your passport, book a ticket and join us on our trip of a lifetime.

L. A. Florrie: Lucy Angela Florrie was born in Liverpool, England, into a theatrical family, so it was pretty much a given that the stage would hold a fascination for her. Lucy's acting career started as a five year old, convincing a stranger on a tram that she was born into an extremely poor family, happily ending up with sixpence in her pocket. Sitting in the seat behind, Lucy's Mum could only smile and shake her head at her young daughter's repartee, wit and somewhat artful talent. At thirteen, in her make shift theatre set up in the garage, Lucy wrote, directed and acted in plays for her family, neighbours and the aged care home across the road. Her parents knew that acting ran in her blood and were proud that she recruited the local kids to act in her productions. Proud too, that she cared enough to entertain the elderly. Years later Lucy formed a band and they toured the clubs in Liverpool for four years. Lucy dabbled in go-go dancing, sadly alone in a cage. She was eventually rescued from gyrating isolation, accepting an offer to be part of Liverpool's first go-go dance troupe. At the opposite end of the dancing scale, her love for ballroom and latin would take over her life, seven nights a week for years. After her parents heartbreakingly died within seven months of each other, Lucy and her sisters emigrated to Australia to start new chapters in their lives. Lucy continued acting, scoring lead roles in amateur plays, musicals and bit parts in film and TV. Lucy also loves writing poems and limericks for friends and relatives for special occasions. A trip to Europe with two friends - and not just any old trip - was the catalyst for this narrative.