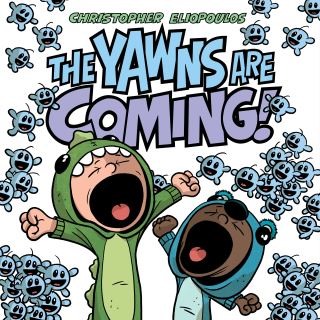 The Yawns Are Coming!

Kids will be giggling through their own yawns as they enjoy this contagiously adorable bedtime story by the New York Times bestselling illustrator of the Ordinary People Change the World books.

Two best friends have big plans for their sleepover. They aren't going to go to bed at all--they'll stay up playing all night long. But then it happens: The YAWNS show up! And as much as they try to outrun and hide from them, it's no use: The Yawns catch them. Maybe they could keep going anyway, but then a DOZE arrives . . . followed by the dreaded SNORES. Will our heroes escape the SLEEPIES?

Need a funny bedtime book that will stealthily bring on a snooze and still have your child asking to hear it night after night? Look no further than The Yawns Are Coming!

Christopher Eliopoulos: Christopher Eliopoulos is the illustrator of the New York Times bestselling Ordinary People Change the World series of picture book biographies. He began his illustration career as a letterer for Marvel and has worked on thousands of comics, including his own Cosmic Commandos and Monster Mayhem graphic novels. He lives in New Jersey with his wife and their identical twin sons (when the boys are home from college).