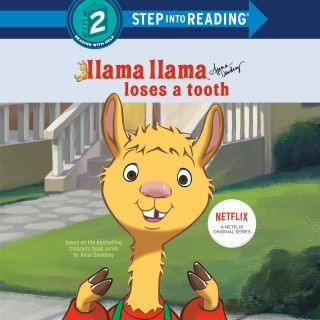 Llama Llama joins the Step into Reading line with a story about Llama's first missing tooth! Based on the hit Netflix television series.

Oh no! Llama Llama has lost his first tooth. I mean, he really lost it! He can't leave it under his pillow because he doesn't know where it went. All of Llama Llama's friend join in the hunt for the missing tooth!

The beloved character, made famous by Anna Dewdney's best-selling picture books, is the star of his own original series.

Step 2 Readers use basic vocabulary and short sentences to tell simple stories, for children who recognize familiar words and can sound out new words with help. Rhyme and rhythmic lines help children decode the story.

Anna Dewdney: Anna Dewdney was a teacher, mother, and enthusiastic proponent of reading aloud to children. She continually honed her skills as an artist and writer and published her first Llama Llama book in 2005. Her passion for creating extended to home and garden and she lovingly restored an eighteenth-century farmhouse in southern Vermont. She wrote, painted, gardened, and lived there with her partner, Reed, her two daughters, two wirehaired pointing griffons, and one bulldog. Anna passed away in 2016, but her spirit will live on in her books.

Cassandra Campbell is a prolific audiobook narrator with more than 700 titles to date. Winner of four Audie Awards and nominated for a dozen more, she was a 2018 inductee in Audible’s inaugural Narrator Hall of Fame. She has consistently been an AudioFile Magazine Best Narrator as well as a Publisher’s Weekly Best Narrator of the Year. As an acting teacher, she spent five years as a faculty member of the Los Angeles County High School for the Arts and has performed in and directed dozens of plays at theaters across the country.