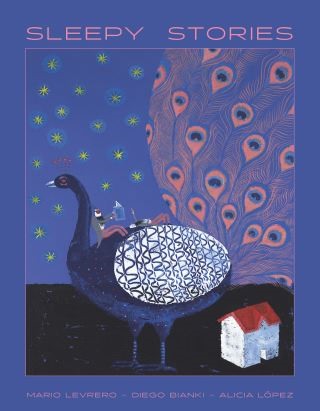 A buoyant account of the nightly tug-of-war between a sleepy father and his son, and the richly imaginative "sleepy stories" they create

Each story told in Sleepy Stories drifts deeper into a beguiling dream world, telling of an elastic gentleman who stretches his body across town to effortlessly slip into bed, or of another sleepy young man who curls inside an upside-down umbrella to take a snooze. In Diego Bianki's magical universe, the waking world is made small (a French press and a red top hat shrink before our eyes), while the dream world Levrero and his son Nicolás build together (a land of sly frogs, giant apes, and smiling squids) waltzes across the page. On the last of Bianki's whimsical illustrations, Nicolás holds the book over his father's nodding head and says, "Another." This is a book to giggle with and curl up with, to take on every sleepy adventure.

Mario Levrero: Mario Levrero was born in Montevideo, Uruguay, in 1940 and died in 2004. Levrero was a photographer, bookseller, comics scriptwriter, humorist, crossword author, and creator of brain games. In his later years, he directed a literary workshop. His novel Empty Words was published in English in 2019.

Diego Bianki is an illustrator, editor, and designer from Argentina. He is co-founder and artistic director of Pequeño Editor, a collective publishing project based in Buenos Aires that specializes in illustrated books. For his illustrations, he has won the 2013 Bologna New Horizons Prize for the book Diccionario para armar, the Konex Career Illustration Prize, and the 2012 Illustration Prize from the Venezuelan Banco del Libro for the book Candombe fiebre de carnaval. He has also won two White Ravens, awarded by Munich's Internationale Jugendbibliothek. About the translator: Alicia López is a translator and sculptor. She grew up in San José, Costa Rica and currently lives in California.