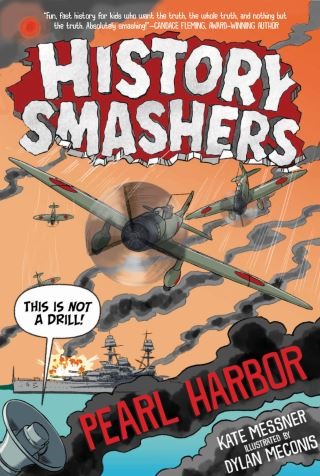 On December 7, 1941, the Japanese launched a completely unpredictable attack on the U.S. Navy base at Pearl Harbor, Hawaii. Right? Well, that's not quite the real deal. Some military experts had suggested that Pearl Harbor was a likely target. There were other warning signs, too, but nobody paid much attention. From the first wave of the Japanese bombers to the United States' internment of thousands of Japanese Americans, acclaimed author Kate Messner smashes history by exploring the little-known truths behind the story of Pearl Harbor and its aftermath.

Kate Messner: KATE MESSNER is passionately curious and writes books that encourage kids to wonder, too. Her titles include award-winning picture books, like Over and Under the Snow; novels, like Breakout and Chirp; the Fergus and Zeke easy reader series, and the popular Ranger in Time chapter books, and works of nonfiction with a focus on nature and history. Before becoming a full time writer, Kate was a TV journalist and National Board certified middle school English teacher. She lives on Lake Champlain with her family and is trying to summit all 46 Adirondack High Peaks in between book deadlines. Visit katemessner.com and Facebook: Kate Messner for more information and follow her on Twitter @katemessner.